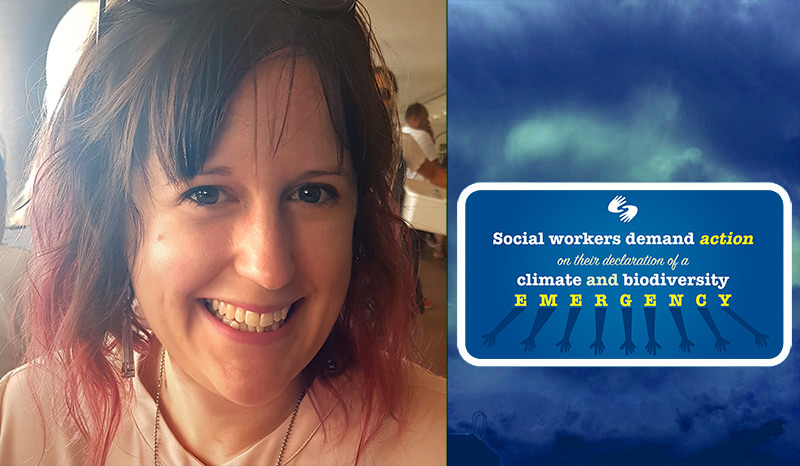 Watching councils, professional bodies and associations declare a climate emergency, and observing the power of the school strike, social worker Jacquelyn Johnson felt that her profession, which pursues social justice as a fundamental tenet, must act in a coordinated manner on what is the single biggest threat to life as we know it.

“There are two things going on for me” said Jacquelyn: “On a personal level I have been trying to work out a way to live with the understanding that global catastrophe is around the corner. This is not easy, I have needed support and I know for sure I am not alone in this experience. Client and social worker alike, climate grief and anxiety is rife. I just can’t look away from what is happening and every day the news gets more frightening.”

“As a parent of two little children, I grieve every moment for the future that they have already lost, the beautiful natural world we are all losing and for the lives that are already being lost to this disaster. It is endlessly frustrating that there is so much our Governments and industries should be doing to mitigate the looming impacts. I can’t simply sit with that frustration, and nor should anyone else.”

“On a professional level, social work interacts with people in their environments. We carry a knowledge of the value of relationships and a systems perspective. We would never suggest to a person that we were supporting that they ignore an impending threat in their life and carry on ‘business-as-usual’. So why are we, as a profession, carrying on as though there isn’t a big, fire-breathing elephant in the room?”


Joint statement
The Social Work code of ethics in Australia promotes social change and the empowerment and liberation of people. It is incumbent on social workers to consider the structural factors impacting upon people’s lives. The climate crisis is an issue of social, political and environmental injustice – it impacts everybody; but not equally.

Jacquelyn has developed a joint statement which reflects those made by other professional bodies. She is encouraging social workers across the country to sign on. The joint statement makes requests of Governments at all level as other have too; communicate the reality of the climate crisis and respond accordingly. To the AASW, the letter points out that at present, governments are abrogating their responsibility to keep their constituents safe. As such, activism is a reasonable response.

“Peaceful protest can change society”, says Jacquelyn. “Social workers are change agents. We have a commitment to active participation in society as a means to bring about meaningful reform. So we need to ensure that our professional registration isn’t impacted by enacting the core values of our work”. The joint statement asks the AASW to protect the registration of social workers caught up in non-violent direct action.


“It is our responsibility to make noise”
“Climate change is happening here, now. Bushfires rage through the first weeks of Spring, drought is drying out much of the country and the temperature is already hitting 30 degrees. We are warned of a dry and scorching summer. People will die this year. 81 per cent of Australians are now concerned about the impacts of climate change. As a relatively privileged person who works in social policy and advocacy, and coming from a place of valuing climate justice, I can see that it is our responsibility to make noise if we can.”

Now is a crucial moment. The Paris climate agreement requires countries to launch concrete plans to tackle the climate emergency, but it won’t happen without massive public pressure, and countries are preparing to meet right now.

“We should be using our collective voice. One of the first and simplest steps we can take as a professional body is to publicly acknowledge the scientific consensus, declare a climate and biodiversity emergency and openly normalise and support peaceful direct social action. That is why we need this joint statement to have as many signatures as possible.”

“Climate justice is now a major focus for social work across the world. Across our Pacific Islands, we are experiencing the real-world impact through loss of traditional lands and environments. Let’s work collaboratively to combat the negative impact of climate change through sustainable practice, policies and research.”
~ Jioji Ravulo, Associate Professor, University of Wollongong