The poll, called ‘The Peoples’ Climate Vote’, was conducted in collaboration between the United Nations Development Fund, Oxford University and a number of non-governmental organisations.

Not surprisingly, the sentiment was strongest among young people: nearly 70 per cent of those under 18 said climate change is a global emergency, compared to about two-thirds of respondents between 18 and 60, and 58 per cent of those over 60.

People with more formal education tended to see climate change as more critical, regardless of the country in which they live.

Of the respondents who considered climate change an emergency, six out of 10 said governments should do all they can, urgently, to address the crisis.

The findings were described as “a tipping point in public attitudes,” and received widespread media attention. 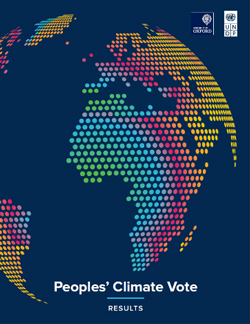 ‘The Peoples’ Climate Vote’ is a pillar of the Mission 1.5 campaign launched in 2020 by the United Nations Development Programme (UNDP) to educate people about climate change solutions and ask them about the actions that they think governments should take. The aim of the Peoples’ Climate Vote was to connect the public to policymakers – and to provide the latter with reliable information on whether people considered climate change an emergency, and how they would like their countries to respond.

The results are in of our #PeoplesClimateVote – the largest survey of public opinion on #ClimateChange ever conducted. Read more and explore the findings now: https://t.co/9s64aEletP#Mission1Point5 pic.twitter.com/TDkN7GcIz7

→ UNDP video about ‘The Peoples’ Climate Vote’ on Facebook

The organisers of the study chose a novel method for gathering information, distributing the survey in 17 languages through game apps on mobile devices, and they acknowledge that the method did not result in a representative sample. Nevertheless, the organisers said, the response sends a signal to policymakers that citizens want their countries to take stronger action to reduce greenhouse gas emissions.

“The Peoples’ Climate Vote shows that there are many opportunities for governments to address climate change with the backing of the people,” the survey report said.

That message comes at a critical moment, as countries are expected to commit to more ambitious emissions-reduction targets by the United Nations annual climate summit COP26, scheduled in Glasgow, UK, in December this year.

So what would they like their governments to do?
In the poll, people were asked about their belief in the climate emergency and which policies, across six areas – energy, economy, transportation, farms and food, protecting people, and nature – that they would like their government to enact. Of a list of 18 areas that could be targeted for solutions, four climate policies emerged as the most popular globally:

Regulating companies — making them pay for their pollution and provide more information to help consumers make climate-conscious purchasing decisions — received solid backing. And almost all the respondents in highly urbanised countries supported the use of clean transportation, such as electric vehicles and bicycles.

“With this news story, it strikes me that those professional NGOs who still refuse to use the language of “climate emergency” — for reasons that seems rather esoteric — are now swimming against a very big tide!”
~ David Spratt, climate-policy analyst, director of Breakthrough National Centre for Climate Restoration

“The survey brings the voice of the people to the forefront of the climate debate.”
~ Achim Steiner, administrator, United Nations Development Programme

“The study may not be rigorously scientific, but it provides some guideposts for both policymakers and climate advocacy groups.”
~ Barbara Fraser, NCR climate editor

→ Forbes – 27 January 2021:
Most People See Climate As A ‘Global Emergency’ And Support Urgent Action, UN Survey Finds
“Marches and protests led by children and teens who have walked out of classrooms — often spearheaded by now well-known figures like Greta Thunberg and Vanessa Nakate — demanding action on climate change have highlighted young peoples’ attitudes to climate change. This poll shows that the generational gap is not as large as many had thought.”