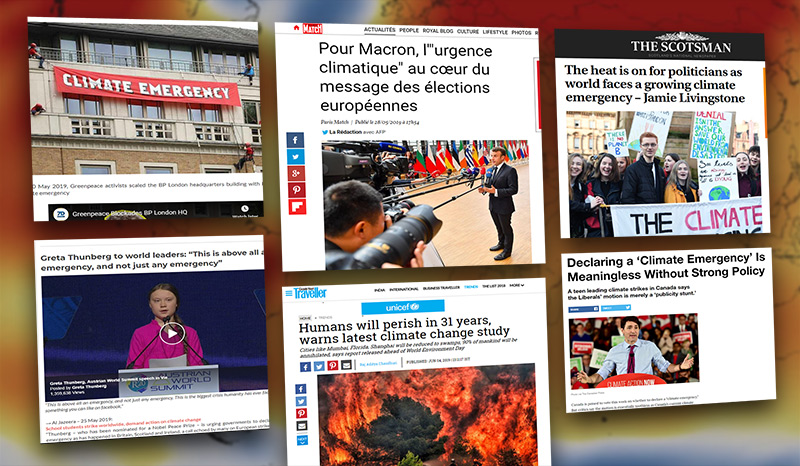 Examples of the general media coverage of the climate emergency campaigns and declarations around the world.

Sweden’s Expressen newspaper are now going to publish daily CO2 levels in the atmosphere “due to climate emergency”!!
Very hopeful! Who will be the next to follow?#ClimateEmergency https://t.co/fD1XEiMjVJ

The Canadian news media have too often failed in their reporting of the #ClimateEmergency. That’s why, as a #journalism prof, I’ve written this open letter calling on the media to make immediate changes to their coverage of that crisis. https://t.co/UPkQGPC3YX #cdnmedia #cdnpoli 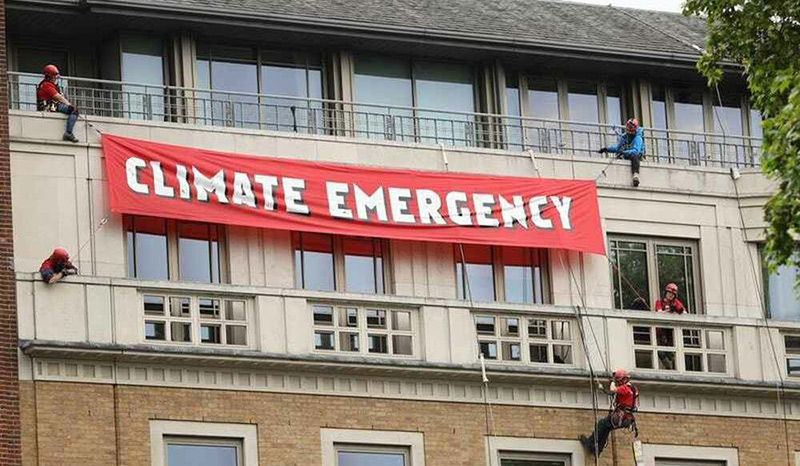 On 20 May 2019, Greenpeace activists scaled the BP London headquarters building with banners declaring a climate emergency 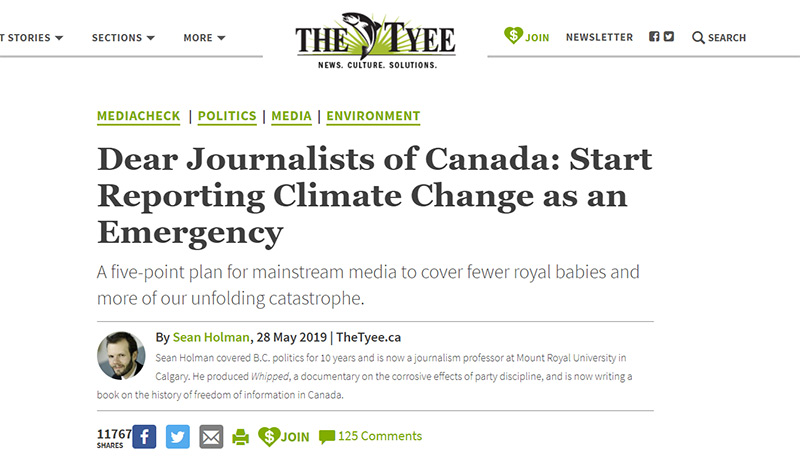 CANADA: “On 15 October, the House of Commons held an emergency debate on that crisis. According to Canadian Newsstream, between that date and Oct. 22, the Canadian Press, our country’s national wire service, produced two stories covering it that may have been carried by other news outlets. The debate was also mentioned twice on CTV’s Power Play with Don Martin, and once by CTV National News and the Northumberland News, a newspaper in Cobourg, Ont. Finally, Postmedia produced an editorial claiming “this sort of fear-mongering doesn’t help the environment or Canadians.” The editorial was published in 22 newspapers. In other words, these sources seemed more interested in convincing Canadians there isn’t a climate crisis than actually reporting on it.”

→ The Tyee – 28 May 2019:
Dear Journalists of Canada: Start Reporting Climate Change as an Emergency
“A five-point plan for mainstream media to cover fewer royal babies and more of our unfolding catastrophe.”

→ GreenWorld – 31 May 2019:
Tackling climate change: Jobs for the future
“A growing number of towns, cities and districts around the UK are pledging to become carbon neutral by 2050. The UK Parliament was the first in the world to declare a Climate Emergency. So what will it actually take to achieve a zero carbon economy? Anne Chapman, co-chair and director at Green House Think Tank, explores.”

Today we continue debate on Minister McKenna’s motion to declare a National #ClimateEmergency.

One day we will need to answer a question: what did we do to fight #ClimateChange & preserve our world for future generations? I know our government’s answer. #ClimateActionNow
(1/2) pic.twitter.com/tTuWqztpi7

Hundreds of protesters have marched through Melbourne CBD today after responding to an invitation to attend the “climate emergency rally”. #climatechange #ClimateEmergency pic.twitter.com/c6nNQqYrxa

"Bristol airport expansion is like a gun pointing at the heart of the planet"
Declaring a #ClimateEmergency is not enough, we have to act like it is one & #ActNow.
Great interview of @GeorgeMonbiot by @morss_alex.
Watch the full video @TheBristolCable >> https://t.co/JQg0n1FSPH pic.twitter.com/dSlPE9nJlu

Amazing to present to the Maple Ridge City Council last night with my fellow Sustainabiliteens! We are asking to align emission reduction targets with science and declare #ClimateEmergency. Looking forward to collaborating in the future! @YourMapleRidge pic.twitter.com/HJTokh8YlU

Motion before the Victorian parliament to declare a #ClimateEmergency. Let's see what they say. #Greens pic.twitter.com/3nycuDmJxZ

Greta Thunberg to world leaders and journalists: “This is above all an emergency, and not just any emergency”

“This is above all an emergency, and not just any emergency. This is the biggest crisis humanity has ever faced. This is not something you can like on facebook.”

→ Al Jazeera – 25 May 2019:
School students strike worldwide, demand action on climate change
“Thunberg – who has been nominated for a Nobel Peace Prize – is urging governments to declare a climate emergency as has happened in Britain, Scotland and Ireland, a call echoed by many on European strikes.”

CANADA
→ Vice – 30 May 2019:
Declaring a ‘Climate Emergency’ Is Meaningless Without Strong Policy
“A teen leading climate strikes in Canada says the Liberals’ motion is merely a ‘publicity stunt.’”

FRANCE
→ Paris Match / AFP – 28 May 2019:
For Macron, the “climate emergency” at the heart of the message of the European elections (article in French language)
“The demand to “respond to the climate emergency” is “a very strong message in France and throughout Europe” Sunday’s European elections, said Emmanuel Macron arriving at the extraordinary summit of the European Union in Brussels.”

ITALY
→ Sky TG24 – 20 May 2019:
Environment climate emergency motion approved in Milan (article in Italian language)
“The Milan City Council approved the motion on the “climate and environmental emergency declaration” in the city. The document was presented by the councillor of the Democratic Party Carlo Monguzzi, and was approved with 31 votes in favour.”

SPAIN
→ La Vanguardia – 20 May 2019:
A dozen environmental groups and NGOs ask the next government to declare the status of ‘Climate Emergency’ (article in Spanish language)
“A dozen environmental groups and NGOs will join this Tuesday to ask the next government, precisely on the day on which the XIII Legislature will be constituted, for the urgent declaration of the state of ‘Climate Emergency’, given the seriousness of the effects of climate change.”

POLAND
→ Refresher – 22 May 2019:
Prague 7 declared a state of climatic emergency (Article in Polish language)
“The City of Prague 7th District joins the call for climate protection.”

UNITED KINGDOM
→ The Guardian – 31 May 2019:
Labour would force firms to fight climate crisis or lose contracts
“Companies bidding for public sector contracts will be forced to take radical steps to tackle the climate crisis under new regulations being proposed by the Labour party, addressing energy use, greenhouse gas emissions and waste.”

SCOTLAND
→ The Scotsman – 29 May 2019:
The heat is on for politicians as world faces a growing climate emergency
“Scotland is leading way by being first country to set legally binding annual emission reduction targets, writes Jamie Livingstone” – “The declaration of an “emergency” reflects the reality that climate change is no longer a distant threat; it is a crisis right now.”

AUSTRALIA
→ Green Left Weekly – 30 May 2019:
Newcastle City Council declares climate emergency
“The City of Newcastle Council passed a resolution “Recognising there is Global Climate Emergency and the urgent need for real action on climate change” on May 28. The motion was initiated by Greens Councillor John McKenzie.”

→ Government News – 27 May 2019:
Cities at the forefront of ‘climate emergency’
“Local governments across Australia are taking a stand against what they say is federal climate inaction on the back of worldwide initiatives like Morocco’s famous ‘blue city’.”

→ The Age – 25 May 2019:
The environment: Establish a bipartisan ‘war cabinet’ on climate change
“With a climate emergency declared in the United Kingdom and the extinction of species, including pollinating insects which are essential to our food supply, occurring at a faster rate than ever before, it is time to look at emergency measures.”

→ The Age – 24 May 2019:
‘We’re worried the planet is dying’: Thousands of climate protesters bring CBD to standstill
“The protesters want the federal government to declare a climate and ecological emergency, and reduce greenhouse gas emissions to net zero by 2025.”

→ Newcastle Herald – 16 May 2019:
Shorten vows to tackle climate ’emergency’
“Labor leader Bill Shorten has toughened his stance on climate change, labelling it an emergency he vows he will prioritise if he becomes prime minister on Saturday.”

→ The Advertiser – 14 May 2019:
PM on Adani spat with CSIRO – the climate emergency – and the Harbour Bridge protest (video)
“The Prime Minister Scott Morrison answers questions on the Adani coal mine approval.”

We've declared our own climate emergency today – more over on my Facebook https://t.co/TmonIvp1W4 pic.twitter.com/Hp5MwHHVQZ