Petition of Shannon Loughnane and certain citizens of Australia

Petition Reason
This petition of certain citizens of Australia draws the attention of the House to the existential crisis of climate change. Scientists predict that with increased warming, we can expect more frequent and intense droughts, floods, bushfires and heatwaves. With rising sea levels, many low-lying nations and coastal cities will be compromised, worsening the refugee crisis. Most alarmingly, scientists also predict a fast-approaching ‘tipping point’ past which warming will exponentially increase beyond human control.

The need to act is absolute. Urgent. Combatting climate change is a collective responsibility with worldwide, not merely national, ramifications. Our efforts to lower greenhouse gas emissions and transition to clean energy shouldn’t be measured by how well or not we ‘outperform’ fellow nations, nor should we aim to meet bare minimums. Rather, we must overachieve – to reach for ever higher emission reductions and renewable energy production, and to make deeper, lasting contributions to global solutions. Our very survival depends on it.

Petition Request
We therefore ask the House to:

• Declare a ‘climate emergency’, order the rapid mobilisation of resources commensurate with the crisis

• Finally, ratify climate policy such as above into legislation so that it may survive changes of government 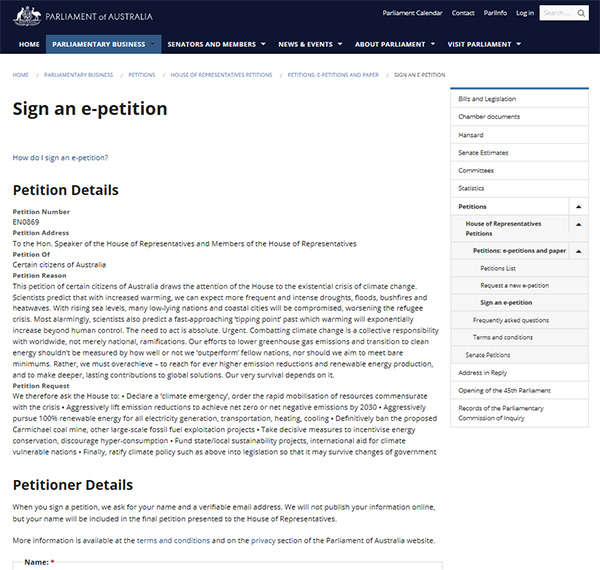