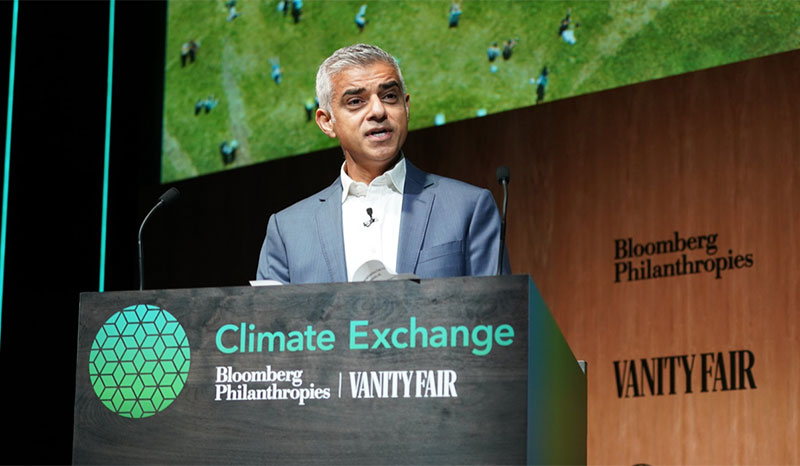 London’s mayor Sadiq Khan has reportedly “declared a climate emergency” and thereby put one of the world’s leading cities of more than eight million people “at the forefront of acknowledging the threat of climate change”. However, exactly how this ‘emergency declaration‘ will be speeding up the city’s action on carbon emissions has not been outlined yet.

Caroline Russell of the London Assembly moves a motion to urge the London Mayor to draw up an emergency plan with the actions needed to make London carbon neutral by 2030, call on government to give him the powers to make this possible and, as vice chair of the C40 Cities network, be a leader on this agenda.

London Assembly emergency motion
In May 2018, Khan unveiled London’s new environment strategy, which was for the city to be carbon neutral by 2050.

Half a year later, the London Assembly, which acts as “a check and a balance” on the Mayor, passed a motion saying that carbon neutral target should be brought forward to 2030 and called on Khan to draw up “a specific emergency plan”:

The assembly motion passed with 12 votes in favour and zero against.

“Catastrophic climate breakdown might be as little as twelve years away – this would have profound impacts on every aspect of our lives in London from flooding and overheating in summers, disruption in our food supply chains as well as in the wider natural world. The Mayor need to be at the forefront of this challenge, declaring a climate emergency and an urgent updating of his carbon reduction targets to make London carbon neutral by 2030, decades ahead of his current plans, setting a precedent for other major and world cities.”
~ Caroline Russell AM

The Mayor has responded to my @LondonAssembly motion calling a climate emergency and will be releasing new plans tomorrow showing the scale of action and powers needed to bring forward his zero carbon target to 2030.https://t.co/RQAGDwyatS

I’m proud that in London we’re leading from the front on climate change.
Good to speak at the @Bloomberg Climate Exchange about the vital action we’re taking to make London one of the greenest global cities. pic.twitter.com/1dDLt3f0n2

In a speech on 12 December 2018, Mayor Kahn then reportedly joined with the City Assembly in “declaring a climate emergency” and accelerating the city’s efforts to transform its economy to carbon-neutrality by 2030.

Khan spoke at an event at London City Hall, outlining London’s new 1.5C Compatible Climate Action Plan, and urging the UK government to do more to avert an ecological breakdown that he said poses “an existential threat to future generations.”

The city was implementing measures to protect people from floods, fires and the political upheaval caused by climate change, he said.

“Growing dissonance”
Author and climate science writer David Spratt commented that, “the proposed actions are a long way short of a whole-of-society approach that makes climate the number one political priority. We face a growing dissonance between ‘climate emergency’ as a problem statement and its proper meaning as a solutions statement.”

“London now joins Bristol, Totnes, and several others across the world including in the USA who are talking the talk. But will Khan walk the walk? Do you think his measures will live up to this landmark declaration?,” asked Extinction Rebellion on their Facebook page:

“The declaration is a good start, but we must push harder and demand more decisive action.”

PUBLISHED TODAY: the 1.5C Compatible Plan looks at the action required in London to tackle #climatechange and recommended pathways to reaching the #zerocarbon target. https://t.co/19T5yhYT60

We’re in the midst of a climate emergency. The Government must stop gambling with our future and give London the powers and funding it needs to protect future generations. https://t.co/0hcVnriWNd

» London Assembly – 6 December 2018:
Assembly calls on the Mayor to declare a Climate Emergency

London’s mayor @SadiqKhan has ambitious sustainability goals for the city.