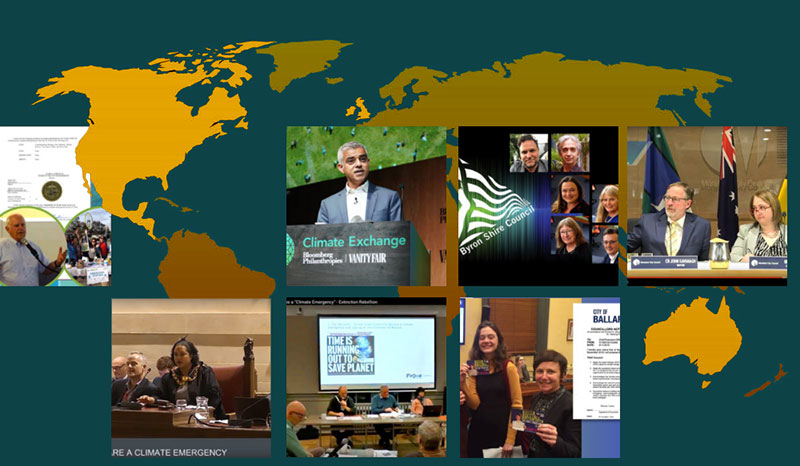 LOCAL GOVERNMENTS COUNTING
On the list below are only included jurisdictions that have passed a binding motion declaring a climate emergency. As such, the non-binding motion instigated by UK Labour, for example, is not included in this data. Typical resolutions include setting up a process to develop an action plan and report back to council within three to six months.

The EU is counted as one jurisdiction in the ‘governments total’, but not included in the country count.

AUSTRALIA
In Australia, where the climate emergency declaration mobilisation and petition was launched in May 2016, close to 100 jurisdictions representing 9 million people – over a third of the population – have declared a climate emergency, including the government of the Australian Capital Territory, based in the capital Canberra, and South Australia’s Upper House. More than 100 of the candidates in the 18 May 2019 federal election signed the Climate Emergency Declaration petition. On 2 December 2020, the federal government rejected a Climate Emergency Declaration Bill proposed by the Greens’ leader Adam Bandt.

These are the overall figures, according to population statistics available via the Internet:

On 1 May 2019, the United Kingdom Labour Party got unanimous support for a non-binding motion in favour of a climate emergency declaration in the House of Commons, claiming Britain thereby was the first country in the world where a bipartisan parliament had declared a climate emergency.

On 3 May 2019, the Gibraltar Parliament followed, and the government of the Republic of Ireland announced their declaration on 9 May. The next day, the Isle of Man parliament declared a climate emergency as well.


→ For more about the history, see Cedamia’s timeline

→ Map of Swedish municipalities – which visualises the status of each, including those who end up voting against declaring a climate emergency.

This data compilation was initiated by Philip Sutton. Various lists are being updated independently, including:

→ The Climate Mobilization’s list (USA):
City by City Campaign: The Race to Mobilize Is On

Note:
We have received questions from councillors and media about what a ‘climate emergency declaration’ or motion should contain, and whether there are certain criteria or guidelines to this.

For instance, can achieving net zero carbon emissions by 2050 be considered an ‘emergency’ response, or should the year be set as 2040, 2030 or even as ambitious as 2025?

Our call for declaring a climate emergency is not structured movement with a specific guideline and a set of criteria as such. It is an open ‘movement of movements’, and there are many opinions floating around about what is the best strategy.

Eventually, it is up to each individual council to make up its mind about what it wants to suggest and to implement.

Historical: This was the text we published in the Australian newspaper The Age on 23 June 2016:

“At the Paris climate talks, scientists and people from low-lying island states set 1.5°C of warming as a red line that must not be crossed. However, earlier this year, the global average temperature spiked past 1.6°C of warming.
The bleaching of coral reefs around the world, increasing extreme weather events, the melting of large ice sheets and recent venting of methane from thawing permafrost make it abundantly clear that the earth is already too hot.
The future of human civilisation, and the survival of the precious ecosystems on which we depend, now hang in the balance.
There must be an immediate ban on new coal and gas developments and an emergency-speed transition to zero emissions. We must begin the enormous task of safely drawing down the excess greenhouse gases already in the atmosphere.
We call on the new parliament to declare a climate emergency.” 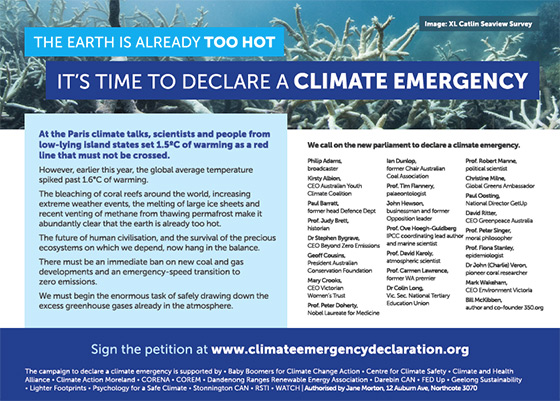 This was the climate emergency declaration petition text we wrote in 2016:

Given that:
• climate impacts are already causing serious loss of life and destroying vital ecosystems
• global average temperature, atmospheric greenhouse gases, and ocean acidity are already at dangerous levels, and
• wartime economic mobilisations have proven how quickly nations can restructure their economies when facing an extreme threat

it is inexcusable to continue with climate-damaging policies that put us all in even greater peril. The Paris Agreement’s 1.5°C goal is not a safe goal.

We call on all Australian federal, state, and territory parliaments and all local councils to:
• declare a climate emergency
• commit to providing maximum protection for all people, economies, species, ecosystems, and civilisations, and to fully restoring a safe climate
• mobilise the required resources and take effective action at the necessary scale and speed
• transform the economy to zero emissions and make a fair contribution to drawing down the excess carbon dioxide in the air, and
• encourage all other governments around the world to take these same actions.

We’ve risen to big challenges in the past when an emergency has been declared, with citizens and all sides of politics rising to the occasion and working together for the common good.

We call on the Australian government to do what is necessary now.