In United Kingdom, Extinction Rebellion spokespersons including Roger Hallam are standing as Climate & Ecological Emergency Independents in the European Union elections. The candidates are inspired by the Youth Strikes 4 Climate, Greta Thunberg and the Extinction Rebellion movement. Their collective actions have created a shift in public awareness around the need to urgently act on the climate emergency. They want to take this kind of energy to Europe, to demonstrate a different kind of politics that goes beyond party politics. A politics that is more human and ordinary and says, “In the face of climate collapse, we can face this together.” The group has three aims: 1. The Council of Ministers and the European Parliament must tell the truth and take action to declare a Climate and Ecological Emergency. 2. The Declaration on a Climate and Ecological Emergency must demand a zero carbon Europe by a date no later than 2030. 3. National Citizen Assemblies on Climate & Ecological Justice must be instituted and have a leading role in shaping a zero carbon Europe.” 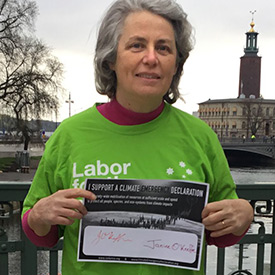 “Miljöpartiet is my party and I am a representative in the Stockholm region, similar to state.” ~ Janine O’Keeffe Coordinator of the international #FridaysForFuture movement 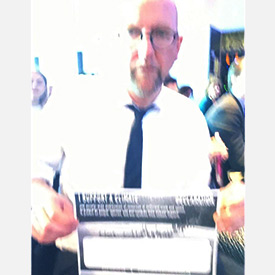 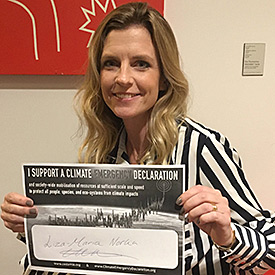 
Supporting councils and universities in the UK

Parents in the EU are doing perhaps the most important thing they can for their kids- choosing to #VoteClimate. Every election must be a climate election. https://t.co/xOQemfESLA

On this page we will keep you updated when we learn about similar candidate groups from other countries.

Make a photographic statement of support

→ Download the sheet at left, sign, and email us a photo of you holding it up. We will post your photo on this page and on social media to show voters which election candidates support a declaration of climate emergency and taking action accordingly.     → BBC News – 17 May 2019: European elections 2019: Why adults are giving kids their vote “Lilly Platt is too young to vote in the upcoming European Parliament election. The 11-year-old won’t be eligible to do so until 2026, when she turns 18. Yet her grandfather, 79-year-old Jim Platt, has found a way for her voice to be heard.”
» Follow on Facebook