On 27 February 2017, Adam Bandt presented the Climate Emergency Declaration petition to the House of Representatives on Steve Posselt’s behalf, and he was happy to accept the 18,101 signatures collected so far to petition the Parliament to declare a climate emergency.

» Audio recording of the petition hand-over in Canberra (30MB)

Steve Posselt thought his Connecting Climate Chaos journey would be over when he got to Paris in 2005, but it was not. If everything promised at Paris is delivered, the planet will likely see global warming exceed a three degree rise above pre-industrial temperatures. Three degrees Celsius means no Arctic or Antarctic ice, no glaciers, and very likely no humans.

On New Years Day 2017, Steve Posselt brought out Old Yella for one last time. He started from his home in Ballina, where he recuperated from the gruelling Paris journey, and paddled down the coast to Moruya, where he turned right, then dragged the kayak up to Canberra.

Along the way he spoke with mayors, MPs and media, and also met up with local climate campaigners who helped him collecting on-paper petition signatures to add to those collected online.

As the grand finale to his Connecting Climate Chaos kayak voyages, on Saturday 25 February 2017, Steve stopped at Engineering House where prominent speakers discussed the climate emergency and climate solutions. On Monday 27 February he went to the Australian Parliament House where he handed over the Climate Emergency Declaration petition and addressed politicians.

“End of a two month journey for Steve Posselt from Ballina to Canberra in his kayak down the coast of New South Wales. At the end of the trip the petition had gathered 18,101 signatures (with petition still open for signing)…”

“This occasion brought together not just many sides of politics but also involved collaboration between the worlds of engineering and climate emergency declaration campaigning.”

“That this House notes that on the first of January this year climate activist and adventurer Steve Posselt began a 1,330 kilometre kayak journey down the NSW coast from Ballina to Moruya and is today pulling his kayak inland to Canberra where later this week he will call on the Federal Government to declare a climate emergency and take urgent action to address climate change.

That this House notes Steve Posselt’s efforts to raise public awareness of the risks from failing to address climate change.”

Steve kayaked from Ballina to Canberra to deliver over 18000 signatures calling for a #climateemergencydeclaration. https://t.co/1mwnzhbj80 pic.twitter.com/Z31xS9CBdO

.@kayak4earth ready to hand over >18,000 signatures so far calling for a #ClimateEmergencyDeclaration. #auspol pic.twitter.com/N9N9mrebf2

Steve Posselt’s visit to Sydney and the Opera House

Steve Posselt was welcomed in Sydney on 28 January 2017.

Short video from our friends at 350 Melbourne:

Steve Posselt is making it the Climate Emergency Declaration petition the focus of his eight-week kayak trek to Canberra. Already there have been lots of media coverage of his trip and his mission.

There will be welcome events and public talks all down the NSW coast – please check out the numerous event pages, come along if you can, and invite lots of friends from those areas to attend too.

What you can do

The handover in Canberra in February 2017 was just an interim handover. Please continue to help reach the 100,000 petition signature target

» Invite friends to the Facebook welcome events for Steve

Do you have an event, or a festival, or a market, or [insert anything you fancy] over coming weeks where you could collect hard copy petition signatures? Or display a poster with QR code for people to sign online via their phones?

Could you ask everyone at your workplace to sign the petition online? Your school? Your local club? Your climate/environment/sustainability group?

Do you have a smart idea of something you could do to help us get over 1,000 signatures per day over the next weeks?

Steve Posselt at the Seine River in France. Click on photo to see high resolution version 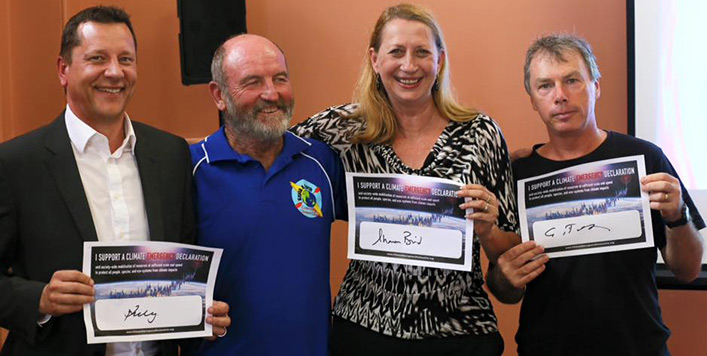 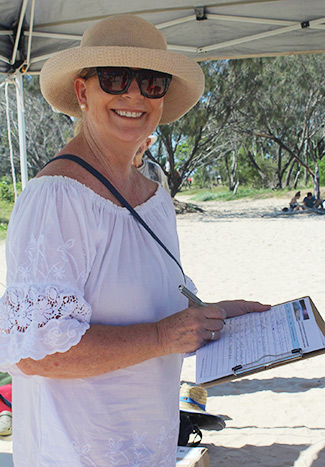 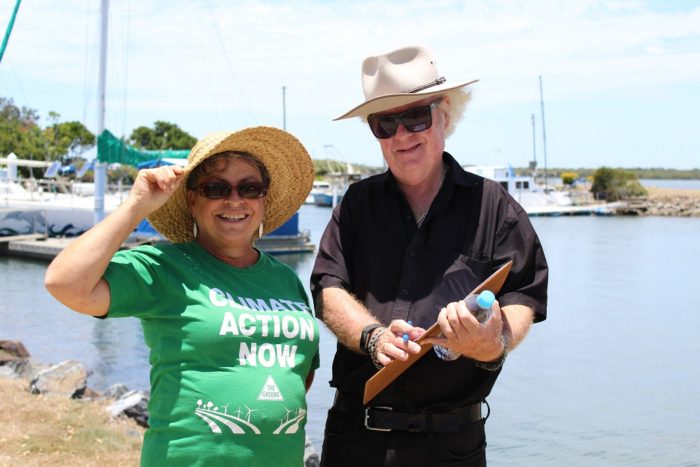 Departure from Ballina on 1 January 2017

Take-off, Day 1: Away he goes to Evans Head

» See the full diary on www.kayak4earth.com/category/diary

“Aussie adventurer Steve Posselt plans to deliver a petition to the federal government calling for action on climate change – with his kayak in tow. Mr Posselt will paddle 12,000km along the New South Wales coast before dragging his kayak all the way to Canberra. “I can only see it as an emergency to do something about it,” Mr Posselt told 9NEWS. “I’ve got five grandchildren and I don’t want them to experience the worst of what can happen.””

NBN News’ Renee Fedder produced this report on 21 January 2017 when Steve Posselt arrived in Newcastle – the halfway mark of his journey to the nation’s capital. 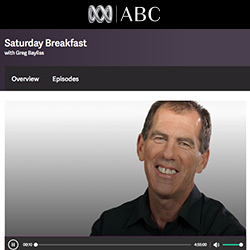 Presenter Greg Bayliss: “A lot of people are concerned the climate, and degradation of our climate, and many of them are getting their messages to people in power in various ways. Well, Steve Posselt has probably trumped anybody who has gone before by way of delivering his message. He is currently paddling his way along Lake…”

“Engineer Steve Posselt worries about climate change. He worries so much that he even paddled his sea-kayak Old Yella in France to Paris for the critical climate change talks in 2015. Posselt believes we are in a state of climate emergency. He says we need to accept the science, ask governments to declare a climate emergency, and immediately mobilise resources at a massive scale.”

“Steve Posselt received a warm welcome and farewell at Crookhaven Heads on Sunday, February 5. The kayak adventurer set off from Ballina on New Year’s Day and is on a mission to raise awareness of climate change. He’s out to collect 100,000 signatures for the Climate Emergency Declaration petition, which he’ll deliver to Canberra politicians at the end of his journey.”

“Local climate action group Eurobodalla 350.org is gathering people to paddle their canoes and kayaks on the Moruya River to welcome Steve Posselt on February 14 at 12 noon. Steve is paddling his kayak from Ballina to Moruya and then dragging the kayak up to Canberra to deliver the Climate Emergency Declaration petition. Eurobodalla Deputy Mayor, Cr Anthony Mayne will hand Steve a bundle of locally signed petitions to take to Federal Parliament.”

“Kayaker and climate change campaigner Steve Posselt made a safe arrival at Kiama on Thursday night. The stopover was part of his epic kayak journey from his home in Ballina to Parliament House, Canberra. He set out on January 1 and plans to present his petition in Parliament House on February 25. Posselt paddled into Wollongong Harbour on Wednesday. He was welcomed at Kiama Harbour by Kiama Deputy Mayor Kathy Rice, Kiama councillor Andrew Sloan and a crowd of approximately 50 supporters.” 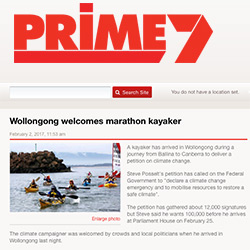 “A kayaker has arrived in Wollongong during a journey from Ballina to Canberra to deliver a petition on climate change. Steve Posselt’s petition has called on the Federal Government to “declare a climate change emergency and to mobilise resources to restore a safe climate”. The petition has gathered about 12,000 signatures but Steve said he wants 100,000 before he arrives at Parliament House on February 25.”

“Steve Posselt paddled into Wollongong harbour on Wednesday and will arrive in Kiama Thursday evening with a message about climate change.
The 64-year-old is kayaking from Ballina to Canberra gathering signatures to declare climate change an emergency.” 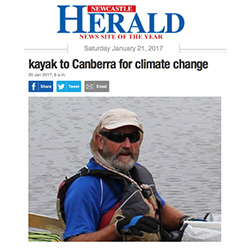 “He’s an eco-warrior and Aussie adventurer who will be kayaking into Newcastle as part of the last leg of a “Connecting Climate Chaos” journey that has taken him around the world. Steve Posselt, 64, has kayaked more than 13,000 kilometres to raise awareness of climate change, including journeying up the Mississippi River, across the Great Lakes of North America, in the Arctic Circle and across the English Channel…”

» The Newcastle Herald – 20 January 2017:
Kayak to Canberra for climate change

“He’s a former Port Macquarie resident who is completing the final leg of an epic around the world kayak adventure.
And it’s all in the name of climate change. During his adventure Steve Posselt has battled…”

Twitter post with short video interview with Steve Posselt recorded by Peter Daniels who works for Fairfax Media in Port Macquarie and the wider Hastings area. 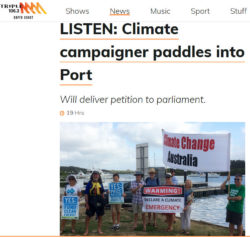 “A Ballina man kayaking 1200km down the New South Wales Coast to Canberra to raise awareness for climate change arrived in Port Macquarie this morning.”

“Kayak adventurer and ecowarrior, ​Steve Posselt, has set off on the last leg of his Connecting Climate Chaos journey that has taken him around the world.

On New Years Day 2017 he brought out his kayak ‘Old Yella’ for the last time and set off from Ballina to collect 100,000 signatures for the Climate Emergency Declaration petition.”

“Climate change was the topic of discussion as kayaker Steve Posselt paddled into Coffs Harbour on his Climate Emergency Campaign last weekend. 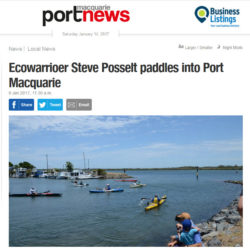 “Kayak adventurer and ecowarrior, ​Steve Posselt, has set off on the last leg of his Connecting Climate Chaos journey that has taken him around the world.

“2016 was a year of damaging storms, droughts, heat waves and catastrophic coral bleaching. One adventure activist is on a kayaking mission, determined to make the Federal Government take climate change seriously…”

Includes a 1:45 min video report about and with Steve Posselt

“He’s battling southerly winds and dodgy knees but Steve Posselt is on a mission to raise awareness of climate change. 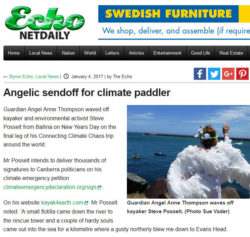 “Guardian Angel Anne Thompson waved off kayaker and environmental activist Steve Posselt from Ballina on New Years Day on the final leg of his Connecting Climate Chaos trip around the world….”

“Driving rain and a thunderstorm at his back had little effect on Steve Posselt’s kayak into Yamba’s Whiting Beach on Monday.

The 64-year-old climate change activist had already been surrounded by water for two days, with many more to come….” 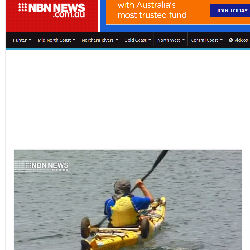 “A Lismore eco-warrior has had an impressive send off in Ballina today, as he heads off on a mammoth kayak journey.”

“A former Grafton High School student has learned a thing or two about the effects of climate change and he will take to the water in his canoe “Old Yella” to spread the word. He expects to arrive in Yamba at about 5pm on Monday after setting out from Ballina on New Years Day on the last leg of his Connecting Climate Chaos journey that has taken him around the world…” 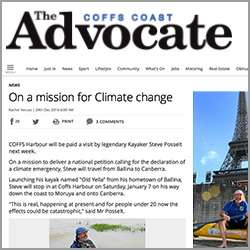 “Coffs Harbour will be paid a visit by legendary Kayaker Steve Posselt next week. On a mission to deliver a national petition calling for the declaration of a climate emergency, Steve will travel from Ballina to Canberra….”

» Coffs Coast Advocate – 29 December 2016:
On a mission for Climate change 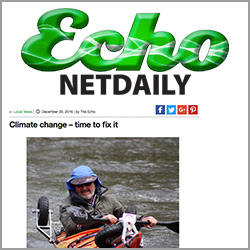 “‘If we do everything we committed to in Paris we are dead meat,’ said local Ballina climate warrior Steve Posselt. This is the reason Steve is bringing his kayak, Old Yella, out for one last trip – because current commitments to reduce greenhouse gasses are just not enough…” 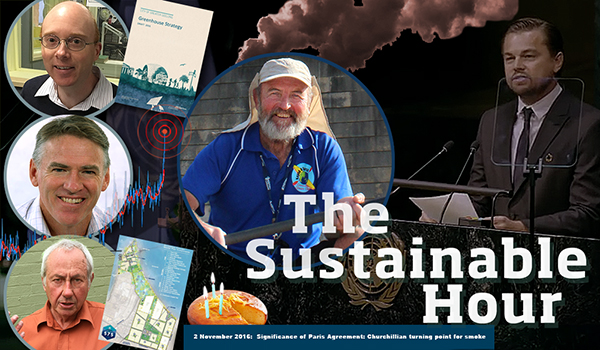 Steve Posselt – on his way to Canberra 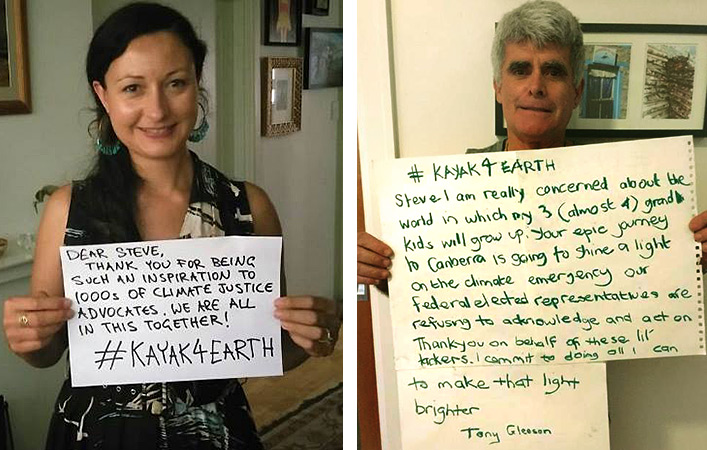 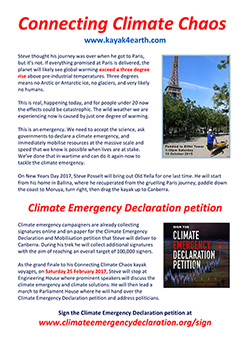 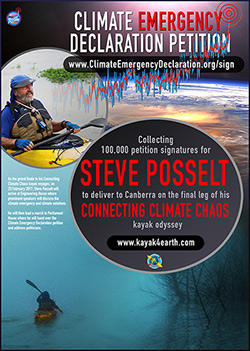 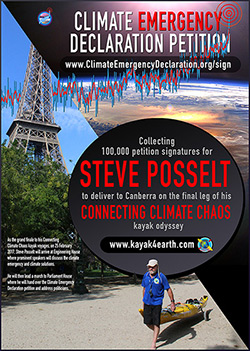 Would you like to help us collect signatures for Steve to deliver to Canberra? Read more