“We need to understand the gravity of the climate emergency and get to the bottom of what science actually demands.”
David Spratt


» More information about David Spratt’s presentation, including all slides

Philip Sutton: What can we learn from history about the declaration of an emergency

» More information about what a Climate Emergency Act could look like

Margaret Hender: Emergency campaigning – what have we learnt so far?

What have we learnt so far from the Climate Emergency Declaration and Mobilisation campaign in Australia and what is needed to achieve our goal?

» Margaret Hender’s presentation in writing, including all slides

Simon Sheikh, CEO Future Super and former GetUp leader, presents his ideas as to how to create momentum on the critical path to the declaration of a climate emergency.

Mark Wakeham: Campaigning on the climate emergency – some thoughts

Mark Wakeham is the CEO for Environment Victoria, one of Australia’s leading environment non-government organisations. He talks about how the message that there isn’t a carbon budget left in his view is best communicated by climate action campaigners – drawing a parallel to the anti-nuclear movements’ refraining from using the mushroom-cloud in their campaigning because it they thought it would put people off. Should we or shouldn’t we be showing the mushroom-cloud of the ‘climate mind bomb’?

Ezra Silk: An update on The Climate Mobilization campaign in the United States 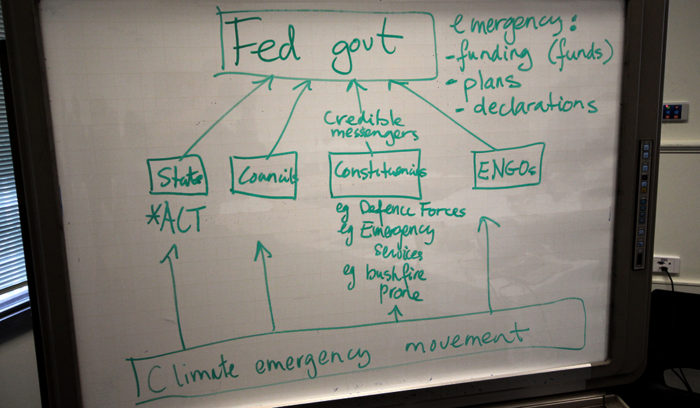 At the end of the workshop, we created working groups which focused on next steps to advance an aspect of climate emergency campaigning.

• Engaging people on the right of politics in climate action
A lot of our natural allies are on the left of the political spectrum. Philip Sutton is coordinating an ongoing working group to consider how we better promote and coordinate the engagement of people ‘of the right’ in tackling the climate emergency.

• VIP commitment to the next steps
Twenty-four eminent people have signed an open letter to the Australian parliament and there are more signing up every day. Mik Aidt and Tony Gleeson are working on organising ‘team building sessions’ and get-togethers for the most influencial and thought-leading Australians who have signed the petition so far.

• Politician sign-up
How can we win the declaration of a climate emergency during the remaining three years of this government? Jane Morton and Margaret Hender are coordinating efforts to sign up as many politicians as possible from all levels of government. Signing up candidates at federal, state, territory and council elections is useful even if they don’t win as they are likely to be influential within their own parties. There is an expanding tool box of sign up sheets and pledges for use with politicians at

• Climate emergency science – what to say and what not to say
A very achievable first step to getting out message out is to reach out to climate groups and friendly journalists with some advice about what to say and what not to say. For example “zero emissions by 2050 is Australia’s fair share of staying under 1.5°C degrees of warming” – “Our carbon budget for 1.5°C degrees will be used up in three years”. We need our allies to move to using emergency language and talking about zero carbon budget and the need for draw down. David Spratt’s talk provides a start on distinguishing helpful and unhelpful messaging. Carol Ride is coordinating the writing of a document.

• Next steps with the climate emergency declaration petition volunteers and helpers
There are plenty of other ideas about how to make progress with our campaign if you would like to be involved there is a to-do list coordinated by and there are lots of other ideas at our private Facebook group Climate Mobilisation Australia. Ask to join here.


Other questions discussed at the workshop

Does your group do climate emergency campaigning? Which type? If not why not? If so how is it going? Could you do more or it?