Watch this video from the UK Met Office to show the rise in temperatures:

Antti Lipponen, a researcher at the Finnish Meteorological Institute, has compiled weather statistics between 1900 and 2016 and turned them into a 35-second video. The results back up what climate scientists have been saying for decades: the planet is warming up.

“The image has resonated with many, as it has gone viral. The only question left is, what action will we take?”
~ Diana Sette, Hyperallergic


Below is another more static way of showing the same data: 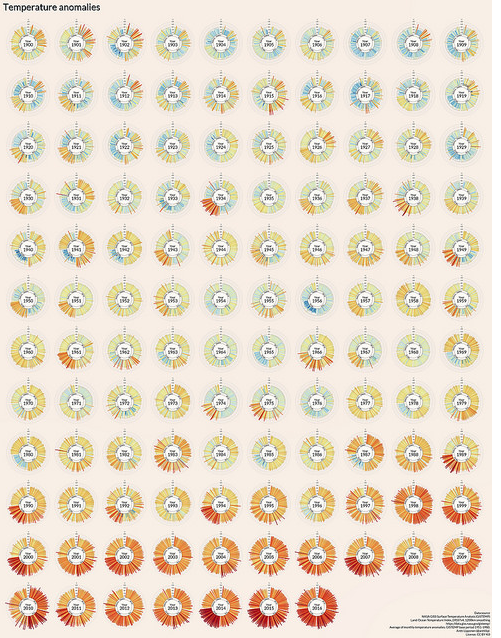 
“We are in a climate emergency.”
~ Adam Bandt

» The Independent – 1 December 2016:
Climate change escalating so fast it is ‘beyond point of no return’

A 6-minute ‘extract’ of the famous tv-series which ran in the US, useful for educational purposes, for instance when giving a presentation – or introducing a meeting.

“The short film presents a clear choice between a dangerous world affected by accelerating climate change and a clean energy future. The future is our choice.”

Air pollution increased by 8 percent since 2011

On 29 June 2016, Stephen Hawking – one of the world’s most brilliant thinkers, and a man who rarely gives interviews – joined Larry King to discuss the greatest issues facing the planet.

Larry King: “Stephen, when we last spoke six years ago, you said that mankind was in danger of destroying ourselves by our greed and stupidity. Have things gotten better or worse since then?”

Stephen Hawking: “We certainly have not become less greedy or less stupid. Six years ago I was warning about pollution and overcrowding, they have gotten worse since then. The population has grown by half a billion since our last meeting with no end in sight. At this rate, it will be 11 billion by 2100. Air pollution has increased by 8 percent over the past five years.”

“The increase in air pollution and increasing emissions of carbon dioxide. Will we be too late to avoid dangerous levels of global warming?”

“When are we going to stop pretending that +2°C is safe for the Great Barrier Reef, when +1°C already bleaches 93% of it?”
Professor Terry Hughes, ARC Centre of Excellence for Coral Reef Studies, James Cook University, 21 May 2016

» Huffington Post – 17 May 2016:
Sydney And Melbourne Copping Record May Heat. The Reason Why Is Scary
Some dramatic statistics to illustrate the unprecedented Australian temperature anomalies being experienced in Australia

This one is a must read

Sky News: What happens as the world warms up

Climate Change: What Happens If The World Warms Up By 5°C?

Published on youtube.com on 3 December 2015
“With forests burning, rivers vanishing and continents carved up by toxic oceans, a world where global temperatures have risen by six degrees would be a bleak one – and almost no environment could sustain human life.”

Climate Change: What Happens If The World Warms Up By 4°C?

Published on youtube.com on 29 November 2015
“After the devastating effects of a 3°C rise in global temperatures, it may become impossible to stop increasing rises.”

Climate Change: What Happens If The World Warms Up By 3°C?

Published on youtube.com on 29 November 2015
“Even if global warming is limited to 2°C, the chances of avoiding a 3°C increase are slim – and that could set off a devastating spiral of climate change.”

Climate Change: What Happens If The World Warms Up By 2°C?

Published on youtube.com on 29 November 2015
“Two degrees is the target for limiting the global temperature increase. But even that limit will have a dramatic effect on the world’s climate.”

Sky News suggests there is a still a carbon budget left. But reality is, there isn’t any budget left.