The Climate Emergency Declaration and Mobilisation

Our goal is for governments to declare a climate emergency and mobilise society-wide resources at sufficient scale and speed to protect civilisation, the economy, people, species, and ecosystems.

• Building public awareness that we are in a climate emergency which threatens life as we know it. We can’t take appropriate action if we don’t recognise we are in an emergency.

• Demanding a climate mobilisation of sufficient scale and speed to protect everything we want to protect. War-time mobilisation examples indicate how quickly and thoroughly ‘business-as-usual’ and ‘reform-as-usual’ can change when we rise to the challenge of dealing with an existential threat.

People are great at rising to the occasion in an emergency. If you happen to be there when a fire or flood occurs, chances are you’ll pitch in alongside emergency service workers to do whatever is needed. Neighbours help neighbours, and strangers help strangers.

We are now in the biggest emergency ever – the climate emergency. Already people are dying and ecosystems are being destroyed.

We know what needs to be achieved – right now – and we already have the technology to do it. We must face up to climate facts, go into emergency mode, and throw everything we’ve got at restoring a safe climate.

We know from our experience of full-scale wartime mobilisations that amazing economic transformations can be achieved in just a few years when we face an existential threat. Let’s demand equally strong leadership and action from our peacetime government in order to protect everything we love.

Join us in petitioning your local council and/or the Australian Parliament to declare a climate emergency and mobilise society-wide resources at sufficient scale and speed to protect civilisation, the economy, people, species, and ecosystems. 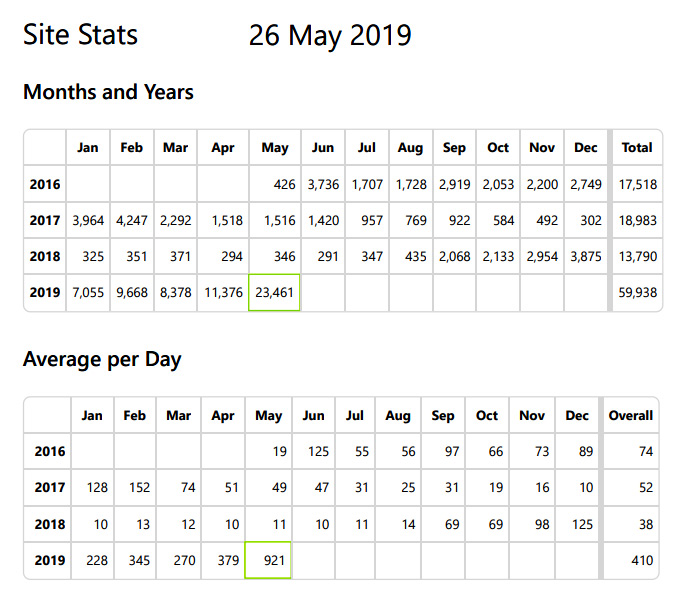 The number of visitors on this website has increased during recent months. In July 2019, the average number of site views per day is around 1,000.

Our strength lies in the many activists taking initiative and working together – or separately, or both – to achieve the campaign goal. The organisation model for this campaign is similar, but not identical, to the ‘million flowers blooming’ approach and the ‘swarm’ concept described in Swarmwise by Rick Falkvinge.

Everyone working on this campaign is volunteering their time and energy – and creativity – in whatever way they think best for advancing the campaign goal. Campaign activities are conducted in an egalitarian and collaborative way, with nobody having the right to try to tell anyone else what to do.

Giving helpful suggestions to the people working on a particular project or part of the campaign is welcome, or pointing out ways you think they might improve what they are doing, but ultimately the decisions about a project are made by the people instigating and working on that project.

Adrian Whitehead and Bryony Edwards, who started CACE – Council Action in the Climate Emergency, were two of the key players behind getting the first council to pass a Climate Emergency Declaration in Australia: the suburban council Darebin in Melbourne which passed a climate emergency declaration in December 2016 – as the first municipality in the world to do so.

Since then, the idea has spread to become a decentralised, swarm-blooming global movement with many hundreds local governments, as well as universities, businesses, schools, and organisations involved and engaged.

→ You can listen to a series of presentations about the movement and its background on
www.climatesafety.info/theclimateemergencyplan

“The Climate Emergency movement has been one of the most striking developments in the fight against climate change, coming as scientists warn we have only 12 years to limit global warming before catastrophic damage occurs. Councils of all stripes have begun to pass motions to dramatically accelerate carbon reduction action. Green World talks to Bryony Edwards, one of the campaigners behind the first Climate Emergency declaration in Darebin, Australia, about the movement’s origins and its next steps.”

→ Bryony Edwards has written this blogpost, where she answers these questions, and more:
www.caceonline.org/blog

She also touches on the history of the movement.

Timeline
→ Margaret Hender has put together this ‘timeline’, which provides an overview of how the Climate Emergency Declaration campaign evolved:
www.cedamia.org/ced-timeline

The content of this website has been provided by one or other of the following groups working on the Climate Emergency Declaration campaign:

Working group Facebook page
As the number of people working towards the campaign goal grows, a network of communication channels and ‘go to’ people will be established. For now, the main ‘working group’ space for swapping notes and resources and organising projects is the closed Facebook group here. Anyone wishing to work on this campaign can ask to join that group.

→ See the groups supporting this campaign

“All of us are fully aware how wrong it is to falsely yell ‘Fire!’ in a crowded theatre. But we are also aware of how wrong it is to sit silently while a fire begins to spread…”
~ Richard Alley, Professor of Geosciences at Pennsylvania State University

Humans are like frogs in a saucepan of water being gradually heated to boiling. Each month brings us more frightening news on the effects of global warming, but because the changes are gradual, there’s never a clear signal that it’s time to jump – time to step up to stronger action.

Climate scientists have been warning us for decades that we face a climate emergency, and that we are close to catastrophic tipping points like the release of methane from the melting Arctic permafrost. Our action to date has come nowhere near what is required to meet the challenge. The future of ecosystems and indeed, human civilisation, now hang in the balance.

This website is part of a growing campaign by grassroots climate action groups to pressure our political leaders to step up and do what is needed to address the climate crisis.

Our goal is for governments to declare a climate emergency and mobilise society-wide resources at sufficient scale and speed to protect civilisation, the economy, people, species, and ecosystems.

We are using the alarming spike in global temperatures during February 2016 and the tragic bleaching of the Great Barrier Reef as the impetus to insist our leaders stop playing political games on climate and stand together to draw a line in the sand.

It’s now or never. We are calling on Australian Councils, state governments and the Australian Parliament to declare a climate emergency and to mobilise resources accordingly. 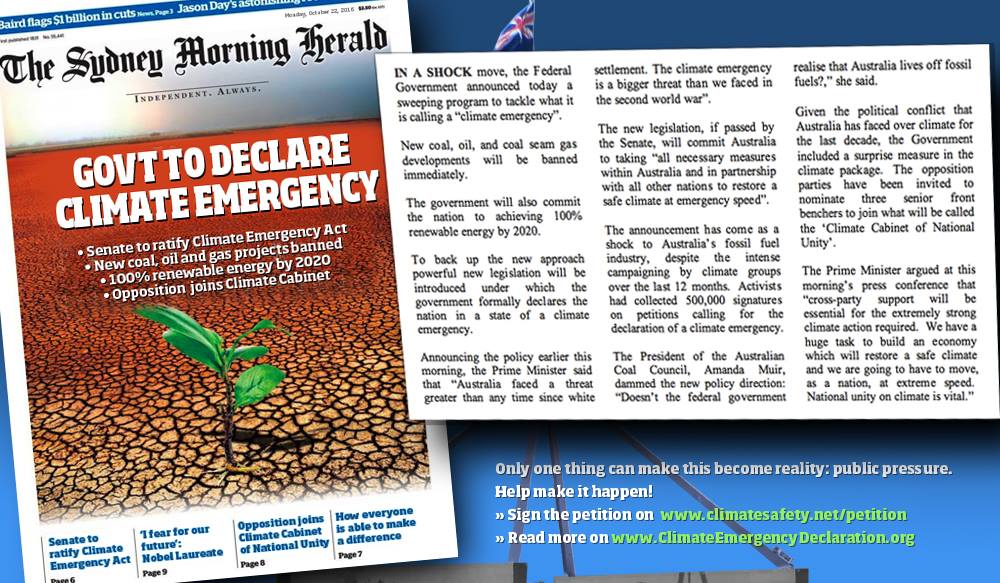 
Declaring a climate emergency is the first step in mobilising government and community resources and funds that are not normally available. Declaring an emergency inspires the public to act for the common good. In the Queensland floods of 2011, three-quarters of the council areas were declared disaster zones. Government funds were made available and a large workforce was mobilised to deal with the emergency. More than 55,000 volunteers registered to help clean up the streets of Brisbane. All over Australia kind-hearted individuals and community groups sent supplies and raised emergency funds.

The extreme weather, increasing food and water shortages, and the death of large areas of the Reef, show us that the earth is already too hot. What is needed is a society-wide mobilisation of a scale and speed never before seen in peace time. We must reach zero emissions as fast as humanly possible and rapidly scale up efforts to draw down the excess greenhouse gases already in the atmosphere.

This was the climate emergency declaration petition text we wrote in 2016:

Given that:
• climate impacts are already causing serious loss of life and destroying vital ecosystems
• global average temperature, atmospheric greenhouse gases, and ocean acidity are already at dangerous levels, and
• wartime economic mobilisations have proven how quickly nations can restructure their economies when facing an extreme threat

it is inexcusable to continue with climate-damaging policies that put us all in even greater peril. The Paris Agreement’s 1.5°C goal is not a safe goal.

We call on all Australian federal, state, and territory parliaments and all local councils to:
• declare a climate emergency
• commit to providing maximum protection for all people, economies, species, ecosystems, and civilisations, and to fully restoring a safe climate
• mobilise the required resources and take effective action at the necessary scale and speed
• transform the economy to zero emissions and make a fair contribution to drawing down the excess carbon dioxide in the air, and
• encourage all other governments around the world to take these same actions.

We’ve risen to big challenges in the past when an emergency has been declared, with citizens and all sides of politics rising to the occasion and working together for the common good.

We call on the Australian government to do what is necessary now.

“Today we must say that promoting gradual solutions to a climate crisis gone critical is a form of silence that will lead to global catastrophe. For the world to take the climate emergency seriously, we in the climate movement ourselves have to do that. We must loudly speak the truth of the critical climate emergency we are facing and the World War II-scale mobilization needed to address it.”
~ Patrick Mazza, Delta 5 activist, co-founder and former research director of Climate Solutions, author of Cascadia Planet 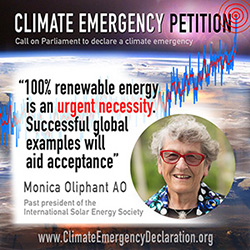