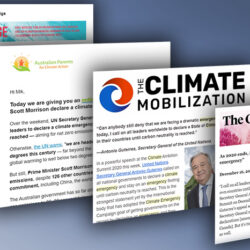 On 12 December 2020, the United Nations Secretary-General asked the world’s governments to declare a climate emergency in their countries until carbon neutrality is reached – in recognition of both the urgency and the stakes. The world’s leading media outlets picked up the story right away and distributed the message widely on tv screens and Read more about Response to UN Chief’s global climate emergency declaration call[…]

I call on leaders worldwide to declare a State of Climate Emergency in their countries until carbon neutrality is reached. Five years after the #ParisAgreement, we are still not going in the right direction. Let’s make the promise of a net zero world a reality. pic.twitter.com/pspktHxQc4 — António Guterres (@antonioguterres) December 12, 2020 At the Read more about United Nations chief calls on governments to declare a climate emergency[…]