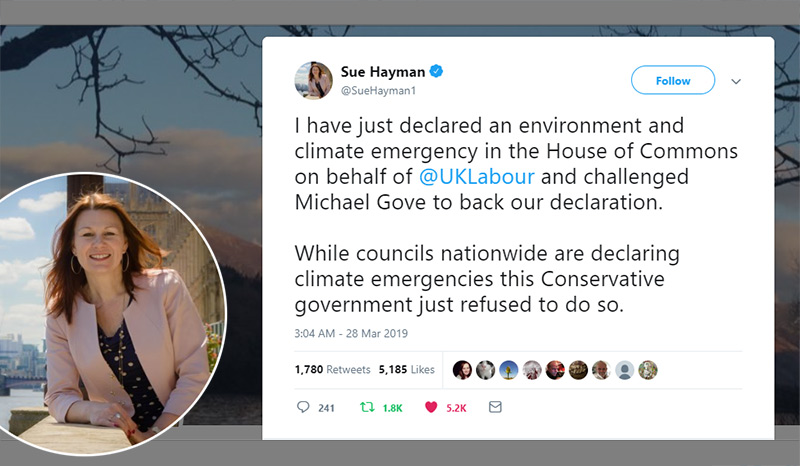 Speaking in the House of Commons, Hayman called on the government to “join Labour in declaring a national environment and climate emergency”.

The move follows 65 councils across the country that have made similar declarations amid growing public concern over climate change. On Twitter, Hayman tweeted on 28 March 2019:

“I have just declared an environment and climate emergency in the House of Commons on behalf of @UKLabour and challenged Michael Gove to back our declaration. While councils nationwide are declaring climate emergencies this Conservative government just refused to do so.
— Sue Hayman

Councils not split along party lines
The move follows declarations of ‘climate emergencies’ at more 65 councils across the UK, including London, Bristol and Manchester. In total, 423 councils world-wide have declared a climate emergency.

These councils are not split along party lines – emergency-declared councils include both Conservative and Labour led authorities. Many councils have announced ambitions to become carbon neutral by 2030.

Mirroring the deal proposed in the US by Democratic congresswoman Alexandria Ocasio-Cortez, the proposals have already seen support from a grassroots Labour campaign, “but are unlikely to make their way into policy in their current form,” commented Josh Gabbatiss, The Independent‘s science correspondent.

Sam Knights, an activist with Extinction Rebellion, was more enthusiastic:

“This is a really important step forward and a victory for climate activists and party members up and down the country. It means going beyond conventional party politics and opening ourselves up to new ideas, new proposals, and brave new worlds,” Knights told Gizmodo Earther. “It means a mobilisation of people and resources that we have not see for decades.”


Rejected by UK government
In response to Hayman, Environment Minister Therese Coffey said the Conservatives were “ahead of the game” in introducing ambitious climate and environment policies, including its 25 Year Plan for Nature.

Meanwhile, public concern over climate change is growing, with thousands of school children across the country participating in climate strikes earlier this month. Campaigners warn that without bolder action across wider sectors of the economy such as transport, buildings and agriculture, UK progress on emissions will grind to a halt.

BusinessGreen reported that the Natural Capital Committee last month warned “substantive action” is urgently needed if the UK is to meet the aims of the 25 Year Environment Plan. As things stand, the UK will currently only meet five of the 19 Aichi biodiversity targets under the Convention on Biological Diversity.

Hopeful! Hope other politcal parties all over the world will follow. This sends a clear message and we can’t solve an emergency without treating it as an emergency. #ClimateBreakdown
https://t.co/IteoO2lWD8