Welcome to our last e-news for 2016. We wish you all a safe and happy festive season, and hope you’ll be refreshed and ready in the new year to help build public support for a Climate Emergency Declaration and Mobilisation. It’s what we need, so why settle for demanding less!

Three senior Labor figures have signed on
Darebin Climate Action Now supporters rallying outside local Labor MP David Feeney‘s office recently were rewarded by Mr Feeney signing the petition for a climate emergency declaration. Mr Kelvin Thomson, former Labor member for Wills, who happened to be visiting Mr Feeney, also signed the petition. The rally was organised to call on the Federal Labor Party to show leadership in saying ‘NO’ to the Adani coal mine. Hopefully many more Labor politicians will follow their lead – as Mr Peter Khalil, Labor MP for Wills, did just today.

We have had verbal support from some Liberal Party politicians, but none, except retired Liberal opposition leader John Hewson, have been prepared to go public. Can you suggest any who might be sympathetic? We have had very strong support from the Greens, including Larissa Walters, their shadow minister for the environment, but we will need support from across the whole political spectrum if we are to win our campaign. 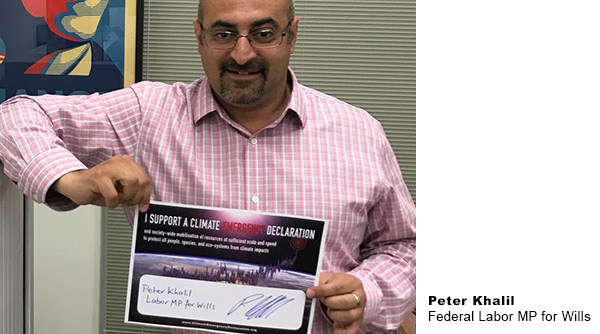 Darebin Council has become the first council to formally recognise we face a climate emergency
In our last update, we told you of the great win for emergency climate action candidates in the Darebin Council elections. Without wasting any time, the new council unanimously passed a motion at their very first meeting recognising that we face a climate emergency. This recognition will guide their policies throughout their four year term.

We hope that Darebin Council will be a showpiece to demonstrate to other councils and state and federal governments what emergency climate action looks like.

Support is growing from the larger groups
NSW Nature Conservation Council has become a supporting group and has urged member bodies to support the petition. The Conservation Council SA has just launched their own Climate Emergency Declaration petition. Like ours, it asks for climate action at WWII scale and speed, but theirs is addressed to state parliaments as well as the federal parliament, so please sign this important new petition even though you’ve already signed ours.

2016 was not a good year for the climate action movement. Governments’ commitments to the Paris Agreement are far from sufficient. The US government has been taken over by the fossil fuel industry, and grim news abounds. See below for examples.

But Australians are mobilising and waking up!

Almost 9,000 Australians have already signed the Climate Emergency Declaration and Mobilisation petition, and numbers are picking up now in conjunction with Steve Posselt’s kayak odyssey.

Victorian climate groups have been taking a leading role in the campaign, and climate emergency is the theme for the Sustainable Living Festival 2017. There will be a climate emergency stall at the festival in Melbourne collecting petition signatures.

Please contact us if you can help out for an hour or three on Friday 10 February (afternoon and evening), Saturday 11 February or Sunday 12 February.

And please save the date for the first Victorian Climate Action Network meeting of 2017 on Saturday 4 February 1:00–4:30pm at St Vincents Hospital.

Come along and meet Steve

Our petition is the focus of the final leg of Steve Posselt’s Connecting Climate Chaos kayak voyage, from 1 January till 25 February 2017.

As he paddles down the NSW coast from Ballina to Moruya, he’ll be meeting with local climate campaigners who are already collecting petition signatures for him to deliver to Canberra, along with the signatures we’ve been collecting online for a while now. He’ll then drag his trusty kayak up to Canberra to deliver the petition.

Help collect 100,000 signatures for Steve to take to Canberra!

There will be events and media opportunities down the coast (see sidebar at right). The Canberra grand finale will include a Lake Burley Griffin flotilla, rally and speakers on the Parkes foreshore, and a march to Engineering House, followed by a public seminar organised by Engineers Australia.

Every time you ask someone to sign the Climate Emergency Declaration and Mobilisation petition you are helping to make this a familiar demand. The public can’t come out in support of this if they haven’t imagined this is possible.
Steve Posselt’s trip provides an ideal focus for asking for petition signatures between now and 25 February.

Thank you for your support so far, and we wish you the very best for 2017.

• OPEC: Oil production the latest half year has risen to a record 33.86 million barrels per day 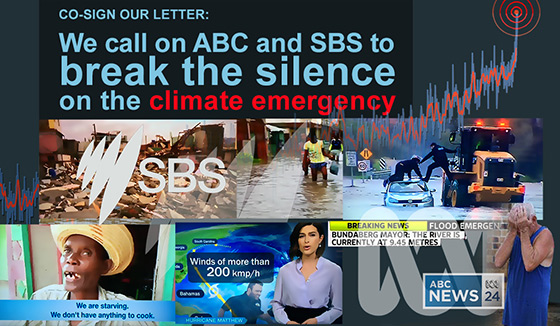 Sign the petition asking ABC and SBS to add bulletins on climate impacts and climate solutions alongside daily weather reports. Close to 1,000 people have added their name and a comment. 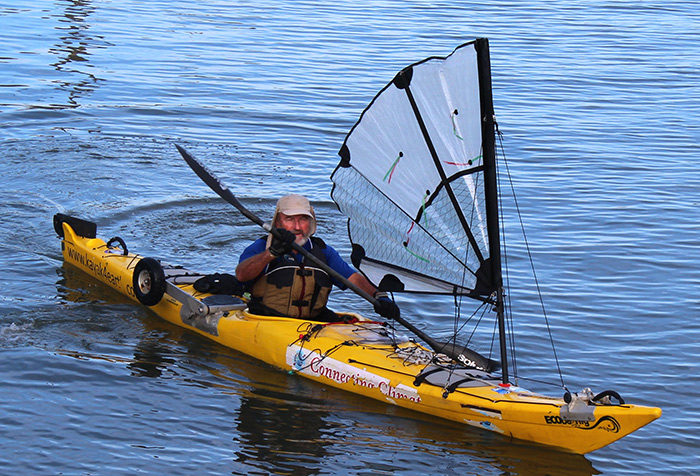 
Note: Please check the above event times closer to the day. There might be slight changes depending on weather, etc.

Believe it or not, there are even more events still being planned, so check back to our event listing from time to time for events at locations near you.

The Climate Emergency Declaration and Mobilisation petition
is a tangible expression of the growing public demand for an effective response to the climate reality.