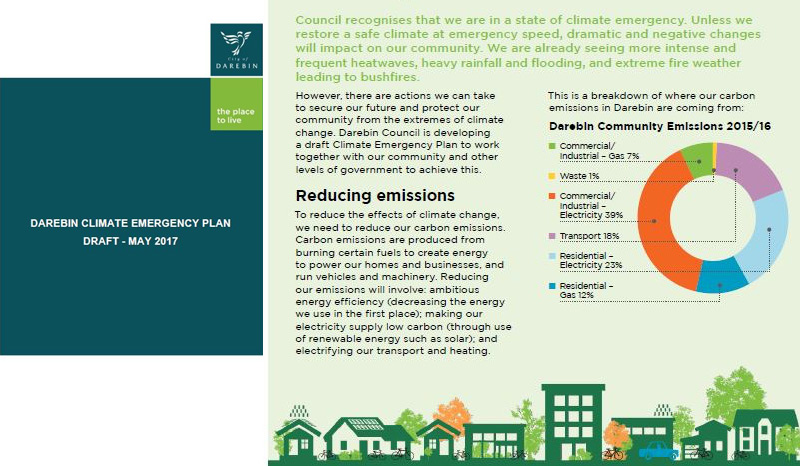 Darebin City Council has produced a 76-page draft Climate Emergency Plan. There aren’t many municipalities, if any, around the world which have done that – so this is a very noteworthy step.

Now the councillors would like to know whether the residents of Darebin think they are on the right track, so the draft plan has been put out on the council’s website for public commenting and submissions, and public meetings about the plan are going to be held in Darebin on 8 June, 13 June and 20 June 2017.

» Listen to an interview with Darebin’s mayor and information about what other councils have been doing on:
www.climateemergencydeclaration.org/mav2017

UPDATE
In September 2018, Darebin City Council presented the first-ever national climate emergency conference hosted by local government. The conference brought together councils, other levels of government, business and organisations as well as our community to identify strategic and urgent action, with appropriate scale and speed to deliver a safe climate.

→ See all videos on this playlist

Survey: eight out of ten Australians ready to act on climate emergency

A survey done by the Global Challenges Forum has found that eight out of ten Australians (81% of the 1,000 Australian participants in the poll) agree with the proposition:

“Do you think we should try to prevent climate catastrophes, which might not occur for several decades or centuries, even if it requires making considerable changes that impact on our current living standards?”

The figure across the 8,000 people polled in eight countries – Australia, China, India, Brazil, South Africa, UK, Germany and USA – was 88%. Nine out of ten.

“The dissonance between what Australian’s understand and what government is doing is remarkable. Australia is failing in its responsibility to safeguard its people and protect their way of life. It is also failing as a world citizen, by downplaying the profound global impacts of climate change and shirking its responsibility to act.”
David Spratt

» Climate Code Red – 29 May 2017:
Three-quarters of Australians say climate warming “a catastrophic risk”, even as government turns a blind eye