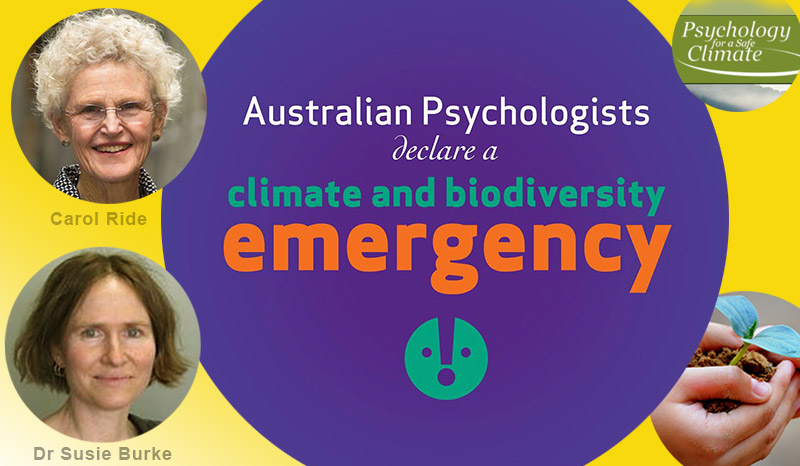 Inspired by the recent emergency declaration by Australian architects, clinical psychologist and health psychologist Emma Poulsen was the instigator of the psychologists’ petition to declare a climate emergency, which was launched on 20 August 2019.

“We are at an important junction in history where we are seeing a global movement of people coming together, trying to avert an impending environmental catastrophe. These people are from all walks of life – students, parents and professionals such as architects and doctors,” said Emma Poulsen.

“Psychologists are evidence-based practitioners. Our therapy is guided by what the research supports. The science is saying that we are on the brink of a climate and biodiversity crisis that will result in economic uncertainty, mass human displacement and food shortages, if left unaddressed.”

Shared understanding
The Australian Psychological Society acknowledge “that climate change is the biggest global health threat of the 21st century and that current Australian and international carbon reduction commitments are nowhere near enough to avoid this threat.”

One of the first and simplest steps we can take as a professional body is to publicly acknowledge the scientific consensus and declare a climate and biodiversity emergency. That is why we are starting with a petition that unites psychology professionals and psychology and counselling organisations around this shared understanding.

Emma was supported by Carol Ride and Susie Burke, both from Psychology for a Safe Climate – a group offering emotional support to those engaged with the climate crisis.

“We hope to use this petition as a platform to call for stronger action to avert this crisis, both within our own professional body and from government,” said Carol Ride.

“Psychologist across Australia are being sought to help people deal with feelings of grief, anxiety and despair about their future. Many potential parents are anguishing over whether or not to have children. The demand for psychologists’ support will only increase, and our capacity to help will be overwhelmed as the crisis intensifies.”

“Psychologists who are aware of the urgent need for emergency action are expressing this by joining the petition. It is also hoped that counselling and psychology organisations will discuss the climate crisis in their organisation, and support the same petition set up for organisations. We see both petitions as a great opportunity to extend the conversation about the climate reality between colleagues,” Carol explained.

→ The petitions were launched on www.climateemergencydeclaration.org/psychologists