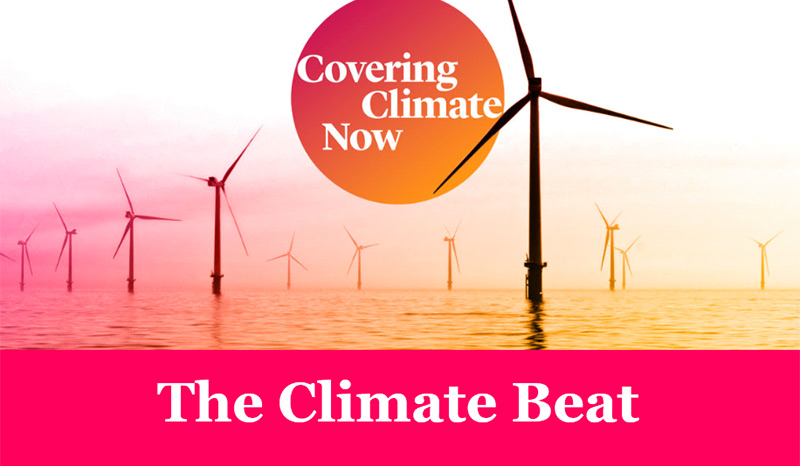 “The big climate news of the past week is that more and more scientists are now using the word “emergency” to describe the circumstances facing humanity,” writes Covering Climate Now – a collaboration of 400 news outlets worldwide – in their newsletter The Climate Beat on 5 December 2019.

Covering Climate Now writes: “Science has always been the foundation of the climate story.” The great mistake of the press over the past 30 years has been to regard climate change as fundamentally a politics story, and The Climate Beat’s first item this week underscores the point:

On 27 November 2019, a week before the United Nations climate summit opened in Madrid, seven of the world’s most distinguished climate scientists published a commentary in Nature – Nature, arguably the world’s pre-eminent scientific journal and one of the first outlets to join the Covering Climate Now network – that repeatedly used the term “emergency” to describe the current situation.

The entire article is essential reading, but the central point is that rising temperatures are pushing some of the Earth’s natural systems toward tipping points that, if crossed, could trigger irreversible climate disruptions that civilisation might not survive. Rapidly melting polar ice and dying forests are two such tipping points. To have a chance of avoiding this outcome, the authors write, “warming must be limited to 1.5 degrees Celcius. This requires an emergency response.”

The authors of this commentary, including Hans-Joachim Schellnhuber, a former top climate adviser to the German and British governments, are not outliers. On 5 November 2019, more than 11,000 scientists signed a statement in the journal Bio-Science declaring “clearly and unequivocally that planet Earth is facing a climate emergency.” Also citing tipping points, the 11,000 scientists warned that such “climate chain reactions could … [make] large areas of Earth uninhabitable.”

What the science says
To date, most news outlets, especially in the US, have chosen not to use the term “climate emergency.” When The Guardian, a lead partner of Covering Climate Now, announced in May 2019 that it would start using the term, it got some criticism from other journalists. “It’s so activist-y,” said a senior journalist at one of America’s most influential news organisations. But is it? Greta Thunberg and other activists do call for action against the “climate emergency.” But they do so, as Thunberg repeatedly explains, because that’s what the science says.

Journalists should not be afraid to follow the same reasoning, and the Nature article and the UN summit provide ideal news pegs. In the spirit of Covering Climate Now’s mission statement — to strengthen news coverage of the climate story — the alliance stands ready to help partners, and any other news outlet, tell this story. The Nature article may not be republished, but Covering Climate Now partners are encouraged to draw upon it in their own coverage.

Covering Climate Now offers to consult with journalists privately on possible approaches. “We can connect you with our Nature colleagues and the article’s co-authors, advise you on their backgrounds and questions to ask them, and suggest how to integrate all this into coverage of the UN summit, which continues through December 13,” they write in the newsletter.

More and more journalists call for better coverage of the climate story by their own newsrooms and the media profession in general. Covering Climate Now, co-founded by Columbia Journalism Review and The Nation, is a global journalism initiative committed to bringing more and better coverage to the defining story of our time. In the second issue of their weekly newsletter they spotlight a handful of the week’s best climate stories, including some that CCNow partners are allowed to republish or rebroadcast free of charge.