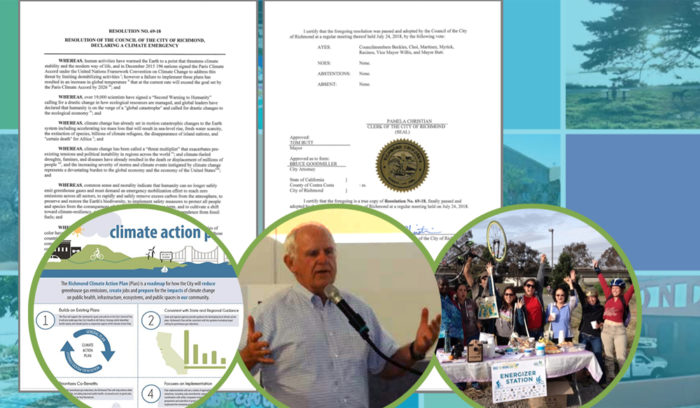 In July 2018, the Council of the City of Richmond in California followed City of Berkeley, Montgomery County in Maryland, Hoboken City Council in New Jersey and the Los Angeles City Council and declared a climate emergency:

“The City of Richmond calls for an emergency mobilization effort to end citywide greenhouse gas emissions, educate residents about climate change, and work to advocate for a mass mobilization at the local, state, national, and global levels.”

The city councils have committed to emergency climate mobilisation and to being an advocate for the cause, which is promoted by The Climate Mobilization.

Resolution of the Council of the City of Richmond, declaring a climate emergency

WHEREAS, human activities have warmed the Earth to a point that threatens climate stability and the modern way of life, and in December 2015 196 nations signed the Paris Climate Accord under the United Nations Framework Convention on Climate Change to address this threat by limiting destabilizing activities [i]; however a failure to implement these plans has resulted in an increase in global temperature [ii] that at the current rate will exceed the goal set by the Paris Climate Accord by 2026 [iii]; and

WHEREAS, over 19,000 scientists have signed a “Second Warning to Humanity” calling for a drastic change in how ecological resources are managed, and global leaders have declared that humanity is on the verge of a “global catastrophe” and called for drastic changes to the ecological economy [iv]; and

WHEREAS, climate change has already set in motion catastrophic changes to the Earth system including accelerating ice mass loss that will result in sea-level rise, fresh water scarcity, the extinction of species, billions of climate refugees, the disappearance of island nations, and “certain death” for Africa [v]; and

WHEREAS, climate change has been called a “threat multiplier” that exacerbates pre-existing tensions and political instability in regions across the world [vi]; and climate-fueled droughts, famines, and diseases have already resulted in the death or displacement of millions of people [vii], and the increasing severity of storms and climate events instigated by climate change represents a devastating burden to the global economy and the economy of the United States [viii]; and

WHEREAS, common sense and morality indicate that humanity can no longer safely emit greenhouse gases and must demand an emergency mobilization effort to reach zero emissions across all sectors, to rapidly and safely remove excess carbon from the atmosphere, to preserve and restore the Earth’s biodiversity, to implement safety measures to protect all people and species from the consequences of abrupt warming in the near-term, and to cultivate a shift toward climate-resiliency, prioritizing conservation, community, and independence from fossil fuels; and

WHEREAS, indigenous communities, low-income communities, and communities of color have suffered the gravest consequences of climate change [ix], and justice requires that those countries, classes, and industries that have contributed the most to this global crisis carry a commensurate burden in reversing it and protecting those most impacted, including the active consultation and protection of vulnerable and historically exploited population in the development and implementation of these efforts; and

WHEREAS, the United States of America has disproportionately contributed to climate change and to preventing a transition away from fossil fuels [x], and Americans thus bear an extraordinary responsibility in combatting climate change; and

WHEREAS, climate change has already resulted in immediate danger to California and Bay Area communities through severe storms, lasting droughts, and increased wildfires [xi], and we cannot wait for more devastating floods, heat waves, fires, droughts, rising sea levels, and public health and humanitarian crises that threaten our community before beginning the necessary emergency response; and

WHEREAS, the City of Richmond has often contributed to this crisis and was slow to hearing the voices of those in the Richmond community suffering under environmental injustice, and thus bears a substantial moral and practical responsibility to continue to curtail the use of fossil fuels and support an equitable transition to a stable climate; and

WHEREAS, as outlined in the Richmond Climate Action Plan it is the goal of the City of Richmond to reduce greenhouse gas emissions, create green jobs, and prepare for the impacts of climate change on public health, infrastructure, the economy, ecosystems, and public spaces in our community, and Richmond has repeatedly upheld this mission through resolutions to protect the environment and divest from extractive industries; and

WHEREAS, the City of Richmond strives to be a leader in combatting climate change, and it is the firm belief of the City Council that the Richmond community and surrounding counties have the insight, drive, capacity and capital to work for environmental justice, and that when we work together across social and city borders we can build transformative networks to combat climate change.

NOW THEREFORE BE IT RESOLVED, that the Council of the City of Richmond declares that we face a Climate Emergency that threatens our city, region, state, nation, civilization, humanity and the natural world; and

BE IT FURTHER RESOLVED, the City of Richmond calls for a Regional Just Transition and Climate Emergency Mobilization Collaborative Effort, inviting all leaders, agencies, and organizations in our regional community to initiate a climate emergency mobilization effort to restore a safe climate; and

BE IT FURTHER RESOLVED, the City of Richmond calls for an emergency mobilization effort to end citywide greenhouse gas emissions, educate residents about climate change, and work to advocate for a mass mobilization at the local, state, national, and global levels; and

BE IT FURTHER RESOLVED, the City of Richmond commits to keeping the considerations of disadvantaged communities central to all climate emergency mobilization planning processes, and to inviting and encouraging these communities to directly advocate for their specific needs and equity in the environmental justice process; and

BE IT FURTHER RESOLVED, the City of Richmond recognizes community environmental justice, economic justice, and racial justice organizations and activists as partners in the Regional Just Transition and Climate Emergency Mobilization Collaborative Effort, and will consult with them at every step of the mobilization process to ensure that efforts are centered in equity and respect for all community members; and

BE IT FURTHER RESOLVED, the City of Richmond calls on the State of California and the United States as a whole to initiate an emergency mobilization effort to mitigate climate change, end greenhouse gas emissions, and immediately initiate an effort to safely draw down carbon from the atmosphere.

I certify that the foregoing resolution was passed and adopted by the Council of the City of Richmond at a regular meeting thereof held July 24, 2018, by the following vote:

[x] Gillis, J., & Popovich, N. (2017, June 1). The U.S. Is the Biggest Carbon Polluter in History. It Just Walked Away From the Paris Climate Deal. The New York Times. Retrieved from https://www.nytimes.com/interactive/2017/06/01/climate/us-biggest-carbon-polluter-in-history-will-it-walk-away-from-the-paris-climate-deal.html

…and recommends you to send something similar to the Council in the municipality where you live. 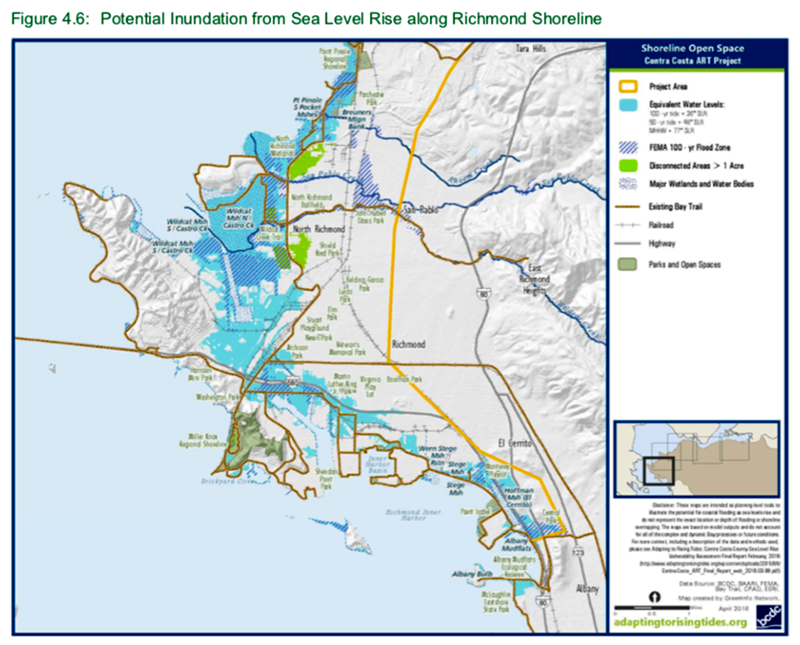 Richmond and the challenge of climate change

Richmond is one of the most vulnerable cities to climate change in California. The city been on the forefront with addressing the challenge over the last decade:

In 2012, Richmond officials adopted Richmond General Plan 2030, which included energy and climate change, far beyond what the State requires in General Plan updates. It also included a comprehensive element in the General Plan 2030 focused on community health and wellness, becoming one of the first cities in the country to do so.

In 2014, Richmond adopted a Health in All Policies framework to solidify “the idea that health starts with where people live, work, learn, and play, and that community health is influenced by more than individual choices.”

In 2016, the City adopted a Climate Action Plan that sets a vision for quality of life improvements such as enhancing the city’s urban forestry, making it safer for residents to walk, bike and connect with transit as well as growing the supply of renewable energy, increasing the share of residential, commercial and other buildings with energy efficiency retrofits.

“The Richmond Climate Action Plan is a roadmap for how the City will reduce greenhouse gas emissions and prepare for the impacts of climate change on public health, infrastructure, ecosystems, and public spaces in our community. The action plan will support the community’s goals and policies identified in the City’s General Plan 2030. The CAP  also features health equity and climate justice as important aspects of the document framework, consistent with City’s Health in All Policies Strategy.”

» The climate action plan and all appendices can be accessed on the City’s Climate Action Webpage: www.ci.richmond.ca.us

“With over 32 miles of bay shoreline that put it on the front line of sea level rise and storm inundation, a large petrochemical industry, and a growing disadvantaged population, Richmond is one of the most vulnerable cities to climate change in California. The Trust for Public Land helps cities use green infrastructure to lower carbon emissions and build resilience while helping to advance climate justice for underserved populations. Green infrastructure can increase the energy efficiency and livability of cities while addressing future climate risks such as flooding and extreme heat. The Trust for Public Land is working with city staff, public agencies, and community organizations to help Richmond implement these policies by prioritizing projects and generating climate-related funding.”
~ Richmond CSC