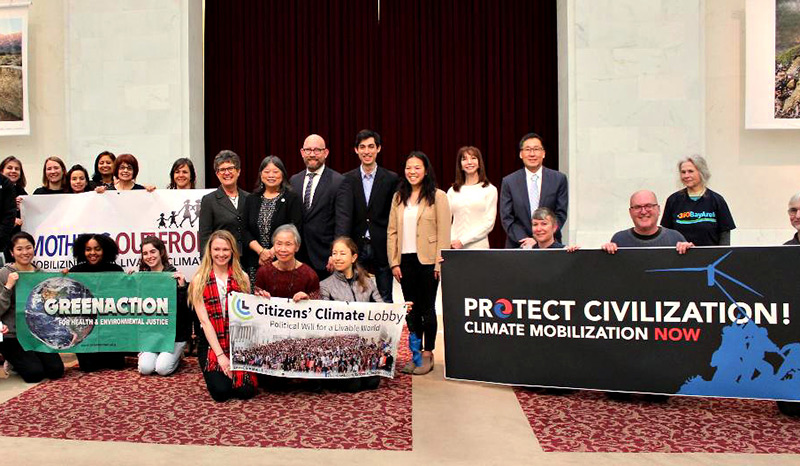 On 26 February 2019, San Francisco’s Board of Supervisors approved a resolution to declare a climate emergency, following the lead of other Bay Area cities like Berkeley, Hayward, Richmond and Oakland.

The San Francisco Board of Supervisors is the legislative body within the government of the City and County of San Francisco in California, USA, with a population of close to 900,000 people.

The climate emergency resolution calls for supervisors to help San Fransisco Mayor London Breed develop a budget that supports climate emergency actions and avoids investing in fossil fuel-reliant infrastructure. It directs the city’s Department of the Environment to issue within 100 days a report detailing the steps San Francisco can take to reduce carbon emissions, followed by a Board of Supervisors hearing on the report to “consider high priority actions that The City can take to achieve deep emission reductions at emergency speed.”

“We need to completely eliminate our reliance on fossil fuels and achieve a 100 per cent greenhouse gas free future for our city. That is the end goal. We all agree that we must get there, it’s just a matter of how,” said San Fransisco Environment Director Debbie Raphael. “Cities contribute 70 per cent of the world’s greenhouse gas emissions, which is why cities like San Francisco have a unique and important responsibility to chart a bold course forward for the world to follow.”

Supervisor Rafael Mandelman introduced the climate emergency resolution. He called upon city departments to deliver “immediate and accelerated action to address the climate crisis,” and wrote on Facebook before a press meeting on 27 February 2019:

“We are declaring emergency, because, simply put, there is no more time to waste. San Francisco, like the rest of California, is already suffering impacts of climate change in the form of droughts, air pollution, extreme heat, and lowland flooding. On our current path, projections show up to eight feet of sea level rise in the Bay over the next 100 years, but even at three feet, we know the Ferry Building would be flooding twice daily and the Embarcadero, Mission Bay and Marina will all be at risk. Already we are planning to permanently close two lanes of the Great Highway in response to rising tides.

We know we will have to find billions, likely tens of billions, to make the infrastructure investments necessary to protect the City from climate change impacts that are already inevitable. We must take every feasible action to prevent even more severe impacts. The emergency is upon us, and we need to recognize that and act with urgency based on that recognition, every day.

This resolution urges the San Francisco Department of the Environment, in collaboration with the Mayor’s office and all other relevant City agencies, to develop and deliver a report within 100 days on the near-term steps our City must take in response to our climate emergency.

In addition, I am calling for a hearing on the high priority actions that the City can take to achieve deep emission reductions at emergency speed.

Finally, I am asking my colleagues and the Mayor to commit to to developing a budget that supports action to address the climate emergency, avoids further investment of public dollars in fossil-fuel reliant infrastructure, and ensures a climate resilient future for all San Franciscans.

San Francisco has long been a leader on environmental issues, and we should all be grateful for the tremendously talented staff of our Department of the Environment, as well as Tyrone Jue in the Mayor’s Office. This resolution seeks to build on and amplify their efforts, and I want to thank them for their partnership in moving it forward.

Climate change is of course a global challenge and will require global action. The scale of the problem can seem overwhelming. But we cannot allow the enormity of the challenge to become an excuse for inaction. To the contrary, governmental officials at every level of government must be and remain singularly focused every day, at every opportunity, on doing everything within our power to avert climate catastrophe.

Other Bay Area cities like Berkeley, Hayward, Richmond and Oakland have already taken the step of declaring a state of climate emergency, and we should certainly join them.

I want to thank my co-sponsors: President Norman Yee, as well as Supervisors Sandra Lee Fewer, Aaron Peskin, Gordon Mar, Vallie Brown, and Matt Haney. I look forward to working with them, and with all of you, as we respond to the greatest emergency of our time. (The Climate Mobilization, Citizens Climate Lobby: San Francisco, Mothers Out Front San Francisco, Greenaction for Health and Environmental Justice, 350.org, San Francisco Tomorrow, Sierra Club, SF Bay Chapter)”
~ Rafael Mandelman

Our Mobilizers were at the press conference announcing the introduction of a climate emergency resolution to San Francisco city council. The resolution directs @SFEnvironment to issue a report on how SF can achieve deep emission reductions at emergency speed. pic.twitter.com/BmufchJQv2

.@OCindivisible met with the Santa Clara County Supervisor @SupEllenberg this week to talk about why the county needs a climate emergency resolution. Serious political change always starts at the local level! pic.twitter.com/75arCVLxv6

Excerpt from the resolution

Resolution declaring a climate emergency and requesting immediate and accelerated action to address the climate crisis and limit global warming to 1.5 degrees Celsius.

“(…) WHEREAS, To stay within 1.5 degrees Celsius, major cities throughout the world will need to significantly reduce their per capita emissions by 2030, and as a city on a rapid growth trajectory, San Francisco has an obligation to lead by example; and

WHEREAS, San Francisco continues to remain a global climate action leader having reduced greenhouse gas emissions 30% from 1990 levels while growing its economy by 111% and population by 20%; and

WHEREAS, According to the Department of Public Health’s Climate and Health Adaptation Framework (2017) the direct and indirect impacts of climate change will disproportionately affect San Francisco communities least able to prepare for, cope with, and recover from them, such as communities of color, low-wage workers, immigrants and other low-income communities; and

WHEREAS, San Francisco, having joined Bay Area cities Berkeley, Richmond, Hayward and Oakland in declaring a climate emergency, will continue to coordinate its efforts with these cities as well as other local, regional, and state governments to accelerate immediate and near-term actions to rapidly eliminate greenhouse gas emissions from fossil fuels, such as gasoline, diesel and natural gas, refrigerants, and other sources;

now, therefore, be it

RESOLVED, That the Board of Supervisors hereby declares a state of climate emergency, given that the climate crisis poses a serious and urgent threat to the well-being of San Francisco, its inhabitants, and its environment; and, be it

FURTHER RESOLVED, That the Board of Supervisors urges the Department of the Environment, in collaboration with the Mayor’s office and all other relevant City agencies, to develop and deliver a technical report within 100 days; and, be it

FURTHER RESOLVED, That the Board of Supervisors intends to schedule a public hearing for the Department of the Environment in coordination with partner City agencies, to present high-priority strategies to achieve deep emission reductions at emergency speed; and, be it

FURTHER RESOLVED, That to meet the City and County of San Francisco’s ambitious greenhouse gas emission reduction targets, the Department of the Environment is urged to review Chapter 9 of the City’s Environment Code and recommend updates or new policies to the City’s Climate Action Strategy, and to take into account the impact on workers and jobs in San Francisco that these policies will have; and, be it

FURTHER RESOLVED, That labor unions and frontline environmental justice communities must be equitably and actively engaged in the City’s transition to a fossil-fuel free economy and prioritized through local climate mitigation and adaptation planning, policy, and program delivery, ensuring a just transition for all people; and, be it

FURTHER RESOLVED, That any legislation or projects started through the climate emergency process should consider union career opportunities, including training and retraining, and investments in working-class, low-income communities, and communities of color historically and disproportionality impacted by pollution, high unemployment, poverty and environmental injustice; and, be it

FURTHER RESOLVED, That as the City works on climate mitigation, it shall continue to advance climate adaptation efforts to address unavoidable current and future climate change impacts; and, be it

FURTHER RESOLVED, That the Board of Supervisors will work with the Mayor’s office, the Controller, and the Capital Planning Committee to develop a budget that enables urgent climate action, avoids further investment of public dollars in fossil-fuel reliant infrastructure when there are clean energy alternatives, supports public sector employees, and ensures a climate resilient future for all San Franciscans.

> The resolution in full