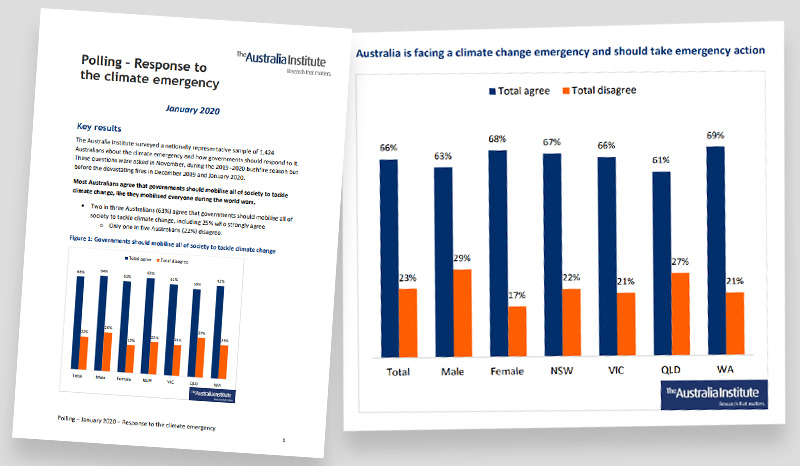 Most Australians now agree that Australia is facing a climate emergency and should take emergency action, according to new polling research from The Australia Institute.

Two thirds of Australians – more women than men – believe the country is facing a climate emergency and that “the Government should mobilise all of society to tackle the issue, like they did during the World Wars.”

The Australia Institute conducted a national survey of 1,424 people between 1 and 15 November 2019, online through Dynata with nationally representative samples by gender, age, state and territory, and household income. The margin of error (95% confidence level) for the national results is 2.6%.

→ Download the publication: ‘Polling – Response to the climate emergency’ (PDF)

85 councils in Australia have declared a climate emergency

In Australia, where the climate emergency declaration mobilisation and petition was launched in May 2016, 85 jurisdictions representing over seven million Australians – 30 per cent of the population – have declared a climate emergency, including the government of the Australian Capital Territory, based in the capital Canberra, and South Australia’s Upper House. → Read more

→ Reuters – 15 January 2020:
Hot and dry Australia could soon make its entire population climate refugees
“Australia is in the midst of one of its worst fire seasons on record, with bushfires burning since September and claiming the lives of 28 people, killing more than a billion animals and razing forests and farmland the size of Bulgaria.”

→ Reuters – 15 January 2020:
Fears for planet dominate as leaders pack for ‘green’ Davos
“For the first time recorded by the report, which is produced by the think tank that runs the event, the top five concerns were all environmental – from extreme weather to biodiversity loss and events like oil spills and radioactive contamination.”

→ Wired – 8 January 2020:
Are Australia’s wildfires pushing us to even more climate disasters?
“Wildfires release vast amounts of carbon into the atmosphere, and may slow the Earth’s ability to absorb more CO2. But their impact on climate change is even more complicated.”