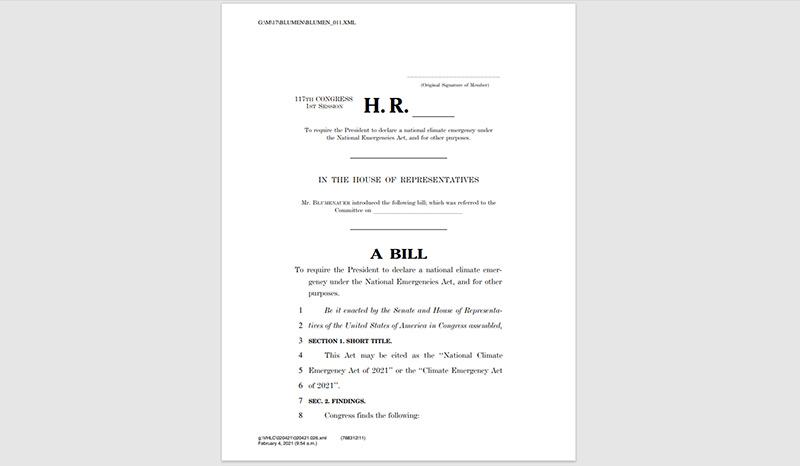 Bernie Sanders, Alexandria Ocasio-Cortez, and Earl Blumenauer have introduced a bill in the US Congress that would require President Joe Biden to invoke emergency powers to tackle the climate crisis.

The Climate Emergency Act of 2021 would unlock 136 statutory powers under the National Emergencies Act, typically available only under extraordinary circumstances, which a climate emergency can be classified as.

“We have to meet the moment. We are out of time and excuses,” said Rep. Ocasio-Cortez in a statement introducing the bill.

After years of climate denial from the GOP, we must use every tool at our disposal to combat the climate emergency.

My new bill w/ @AOC and @BernieSanders mandates the declaration of a national climate emergency, a necessary step in the fight for our planet. #ClimateEmergencyNOW pic.twitter.com/zQ3nXhpdXm

The move has the explicit backing of Senate Majority Leader Chuck Schumer, and Speaker of the House Nancy Pelosi also voiced her support for a similar idea two years ago.

“If there ever was an emergency, the climate crisis is one,” Schumer said.

“Climate change is the existential threat of our time. By officially declaring it a national emergency, the Biden-Harris administration can unlock more tools and resources to tackle this crisis head on.”

Climate change is the existential threat of our time. By officially declaring it a national emergency, the Biden-Harris administration can unlock more tools and resources to tackle this crisis head on.

→ Brennan Center – 24 April 2020:
A Guide to Emergency Powers and Their Use
“The 136 statutory powers that may become available to the president upon declaration of a national emergency.”

American journalist and climate scientist Eric Holthaus reported that Biden’s campaign website referred to a climate “emergency” at least nine times, including once explicitly in a fundraising pitch calling for “drastic action” – a sign that he’d also at least tentatively be on board with the move.

Biden’s first days in office have seen an unambiguous priority on climate action and environmental justice, and declaring an emergency would help him greatly escalate his ambitious climate agenda, Holthaus wrote.

Although Biden could unilaterally declare a climate emergency at any time, doing it via an act of Congress would put the move on firmer legal footing, as Earther’s Dharna Noor explained.

Trump used the National Emergencies Act to bypass the Endangered Species Act and other laws to begin construction of the wall at the southern border, and opposition from Republicans and some Democrats to going this route are sure to be an uphill battle.

The move also has the backing of key facets of the climate movement. The Sunrise Movement, the Climate Justice Alliance – a constellation of dozens of environmental justice organisations – and the Climate Mobilization, an organisation explicitly founded to advocate for adopting a formal climate emergency, are all calling for this bill to pass through Congress.

Frontline, community-based organizations have the solutions to the extractive industrial systems that are eroding human’s primary means of existence on the planet. https://t.co/X0Twd5CPXM

Declaring a climate emergency under the National Emergencies Act would give President Biden nearly everything he needs to begin radically reshaping the economy of the United States for a zero carbon world and steer American society toward an ecological future. It would be Biden’s best way of launching a Green New Deal. The text of the bill itself (PDF, 18 pages) is well worth the read, and is perhaps the most succinct and persuasive argument I’ve ever seen for what a full-scale climate mobilization would look like.

The bill is explicit that climate disasters “disproportionately impact frontline communities and endanger populations made especially vulnerable by existing exposure” to injustice, including people “living with income inequality and poverty, institutional racism, inequity on the basis of gender and sexual orientation, poor infrastructure, and lack of access to health care, housing, clean water, and food security are often in close proximity to environmental stressors or sources of pollution, particularly communities of color, indigenous communities, and low-income communities.”

In short, the climate emergency is everything, it is intersectional, and it is inseparable from the imperative to fundamentally remake society and move away from an extractive relationship with each other and with the land.

The bill states this plainly: “The massive scope and scale of action necessary to stabilize the climate will require unprecedented levels of public awareness, engagement, and deliberation to develop and implement effective, just, and equitable policies to address the climate crisis.”

Practically, the bill calls for massive investment in public transportation infrastructure, retrofitting of nearly every building in the country, a special focus on public health and regenerative agriculture, a “transformation” of the industrial base of the country, and jobs programs that are racially and socially equitable to carry all this out.

The most striking thing to me: The bill would require an annual progress report on all of these objectives. No more far-off goals for 2050 or 2035. We’d have one-year targets. Every year.

We’d finally have the mindset of an emergency. We’d see tangible results in a timeframe that matters for both people on the front lines of the emergency and the climate system we’re trying to preserve. We’d win back our planet, and have a thriving society to enjoy it.

Of course, words alone – even words this bold – won’t make the climate emergency magically disappear on their own. We’ll need to keep holding leaders to account, and demanding that our changes are rooted in justice.”

If all this sounds good to you, you can help make it a reality: Call your member of Congress – (202) 224-3121 – and ask them to co-sponsor the National Climate Emergency Act. If they’re already a sponsor, thank them.

Folks, this is actually happening. We’re on the verge of moving into emergency mode on the biggest problem we’ve ever faced as a species. Let’s demand that this bold story of a better world get started as soon as possible.”

We’re on the verge of moving into emergency mode on the biggest problem we’ve ever faced as a species.

Let’s demand that this bold story of a better world get started as soon as possible.@POTUS, it’s time to declare a climate emergency.https://t.co/kK5oMTHcwE