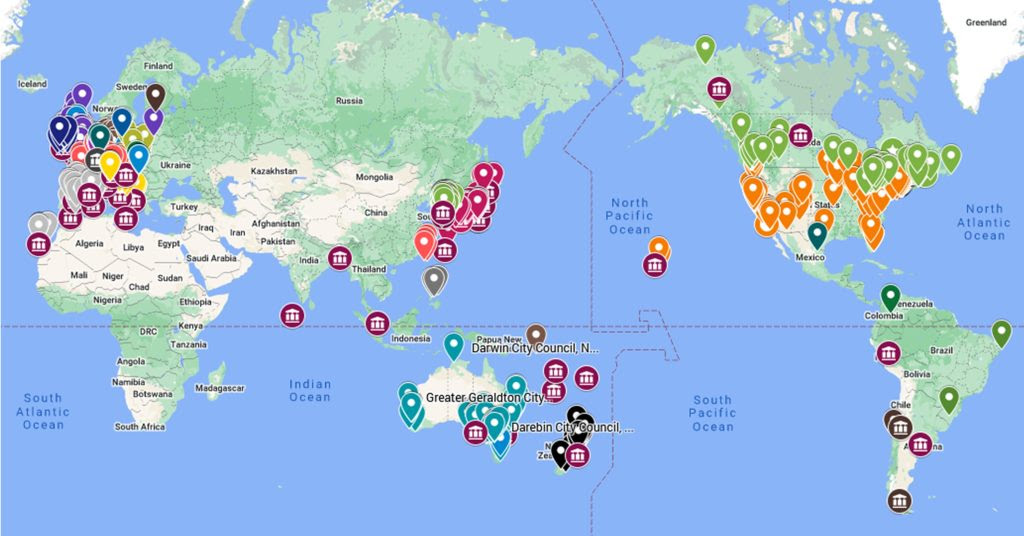 New declarations might not be receiving a lot of media coverage these days but there are now 2,248 jurisdictions that have passed a Climate Emergency Declaration (CED). In just the last fortnight there have been two more CEDs in the UK (North Yorkshire County Council and Swindon Borough Council) and one more in Japan (Hiroshima City).

Certainly the rate of new declarations has slowed since the start of the pandemic, but even the CEDs that are happening now seem to get less media coverage than during the 2019 peak. The ground-breaking declaration by the first Australian state, South Australia on 31 May 2022, received little media coverage, and the April declaration by Nillumbik Shire Council in Victoria received none.

In April 2020 there was just one new CED in the US and one in Italy. That suggests that the pandemic that was escalating at the time was a factor slowing the rate of new declarations. But it wasn’t the only factor. The dark purple bars in the chart above show the UK CEDs, a massive 506 before April 2020. Of those, 265 were mid-tier councils in England, of which there are only 333 in total. By 2020 there weren’t enough non-CED mid-tier councils left for such a high rate of new CEDs to be possible. Even so, their numbers did continue to rise. Currently 278 (83.5%) mid-tier councils of varying political persuasions have passed declarations.

The earliest Climate Emergency Declarations in the UK were by Labour-controlled councils. The first by a Conservative-controlled council was by Devon County Council in February 2019, but thereafter the growth trajectory has been similar across all types of UK councils. For context, at 2020 approximately 41% of the mid-tier councils where any particular party had control were under Conservative control, 33% were Labour-controlled, 14% Liberal Democrat, and Independents were in control at 12%.

The following chart suggests national and subnational governments were focusing on the pandemic rather than climate during much of 2020.

By February 2020 there were 11 national CEDs, and 32 CEDs by subnational governments such as states, provinces, cantons, or prefectures. The Republic of Ireland was the first national declaration in May 2019, followed by Canada, Argentina, Spain, Austria, France, Malta, Bangladesh, Italy, Andorra, and the Maldives. The graph then flat-lined during mid 2020 before starting a slower but steady rise, reaching 18 nations with the declarations by South Korea, Japan, New Zealand, Singapore, Fiji and, most recently, Peru and Vanuatu this year.

The subnational graph also went flat for much of 2020 before resuming a steady but slower rise. To date there have been 41 CEDs passed by subnational governments, including the devolved governments of Scotland, Wales, and Northern Ireland. Others include Gibraltar, the Australian Capital Territory, Quebec, 7 cantons in Switzerland, 7 regions of Italy, 6 prefectures in Japan, and the state governments of Hawaii and South Australia.

Is language also a factor?

Language is a third possible explanation for the slower rate of new CEDs over the last couple of years, or more precisely, the rate of new CEDs reported in cedamia’s global list and global maps of CED places.

For clarity, the above graph omits data for the UK, Quebec, and South Korea due to their relatively high numbers of declarations, and also the countries where only a few CEDs have occurred. Countries with a steady increase in CED numbers over the last couple of years are shown with thick lines: Australia, Canada (apart from Quebec), the US, and Japan. All except Japan are English-speaking countries, and language is not an issue for Japan because a colleague there reliably sends me notifications when new CEDs occur.

The only English-speaking countries with flat lines are New Zealand and Ireland. In both cases, the majority of council areas had already passed a CED prior to the pandemic, so fairly flat lines since are inevitable. But have there really been no new declarations in Italy, Germany, Spain, France, Switzerland, and Austria over the last couple of years despite significant activity earlier? Or is it that new declarations in those countries have not appeared in the English-language media articles I see via Google Alerts?

With the language issue in mind, Cedamia and ICLEI recently signed a memorandum whereby ICLEI will eventually become a multilingual reporting destination for new CEDs and we’ll share responsibility for collecting and displaying a shared set of data.

In the meantime, if you happen to know of any comprehensive lists of Climate Emergency Declaration places in countries with other languages, please get in touch!

If you’d like to receive future cedamia blog articles about new CEDs and council post-CED actions (one or two a month) directly to your inbox, click the Follow button below and set how you prefer to receive them.

This post first appeared on cedamia under the title: Are Climate Emergency Declarations still happening?