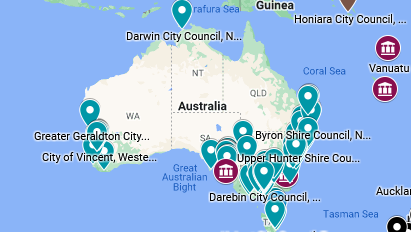 The Liverpool CED is the first example I’ve seen of a council developing their climate action plan as a precursor to passing a Climate Emergency motion. However, in April this year Nillumbik Shire Council also took an atypical step by declaring a Climate Emergency and simultaneously adopting their Climate Action Plan 2022-2032.

Item 2 of the Liverpool motion explicitly “Acknowledges the progress made in developing and adopting a Climate Change Policy and Action Plan”. The preamble to their motion provides a clear hint of a reason for doing so:

Some have called declarations of climate emergencies as largely symbolic or tokenistic, that don’t entail substantial or systematic changes.

Claims that CEDs are ‘just words’ are so ubiquitous that it is easy to imagine a council wanting to avoid such criticism. But is it a valid criticism? Where is the evidence? Have CED critics bothered to look at the track records of CED councils to see what they have done, or do they just assume that claim is true because such a large number of media articles say so?

Which should come first – climate emergency declarations or action plans?

Engage with our community, staff, climate experts, and other stakeholders to develop a Climate Emergency Action Plan in line with the review of the Council’s Strategic Plan

The discussion points included in the minutes identify many advantages of declaring a Climate Emergency, but one that relates specifically to the timing of a declaration states:

In contrast, Eurobodalla Shire’s approach appears to be to wait on a mandate from their community, firstly to develop the action plan they’ve just adopted, then to potentially declare a Climate Emergency sometime in the future.

The declaration first scenario reflects the notion that a local council has a responsibility to take a leadership role in an emergency: firstly to announce that there is an emergency, and then to say what they are doing and what the local community can do to tackle the emergency. That makes sense to me, but on the other hand, a key challenge for society-wide change is for local councils to ‘take the community along’ with their climate emergency action. From that perspective, it will be interesting to see if the Eurobodalla approach ultimately proves to be more effective.

The Australia section of cedamia’s global CED data sheet shows links to 89 climate action plans (81% of CED councils). They have a wide variety of plan names, not necessarily Climate Emergency Action Plan or even Climate Action Plan and some are still at the draft stage, but almost all are climate focused action plans developed in response to passing a CED. A few plans, such as the 2025 Carbon Neutral Adelaide Plan, were adopted prior to council declaring a Climate Emergency. Even so the Adelaide plan has one of the most ambitious community-wide carbon neutral target dates.

14.3% of Australian CED local councils have set a 2030 carbon neutral target date for their entire community, 11.6% have set 2040, and 9.8% have set 2050. These dates reflect the relative difficulty for a council to affect the carbon emissions of local residents, business, and industry. However, council’s own operations generally only account for 1-2% of all the climate-damaging emissions from their local area. That makes it critical that councils find innovative ways of inspiring action within their communities and making it easier for everyone to ‘do the right thing’.

Local councils have close to complete control over their own carbon emissions and there are some notable success stories. 9.8% of Australian CED councils have already achieved carbon neutrality for their own operations. 11.6% have set a 2025 target, and 20.5% have a 2030 target.

I suppose one might argue that even action plans and targets are ‘just words’ and it is actual outcomes that count. More on specific actions taken by CED councils in future blog posts, but in the meantime you can see some of them on cedamia’s post-CED action page. Please leave a comment below if you have something to add to this story. (If reading this article via email, go to https://www.cedamia.org/news/ to comment.)

If you’d like to receive future cedamia blog articles about new CEDs and council post-CED actions (one or two a month) directly to your inbox, click the Follow button below and set how you prefer to receive them.

#Climate emergency declarations around the globe – all the figures updated in one fact sheet. No excuses for not being able to quote the numbers! https://t.co/VAjyRvCxFj pic.twitter.com/ExomiKLRtl