Oxford Dictionaries has declared “climate emergency” the word of the year for 2019, following a hundred-fold increase in usage that it says demonstrated a “greater immediacy” in the way we talk about the climate.

The dictionary’s word of the year is chosen to “reflect the ethos, mood, or preoccupations of the passing year” and should have “lasting potential as a term of cultural significance”. 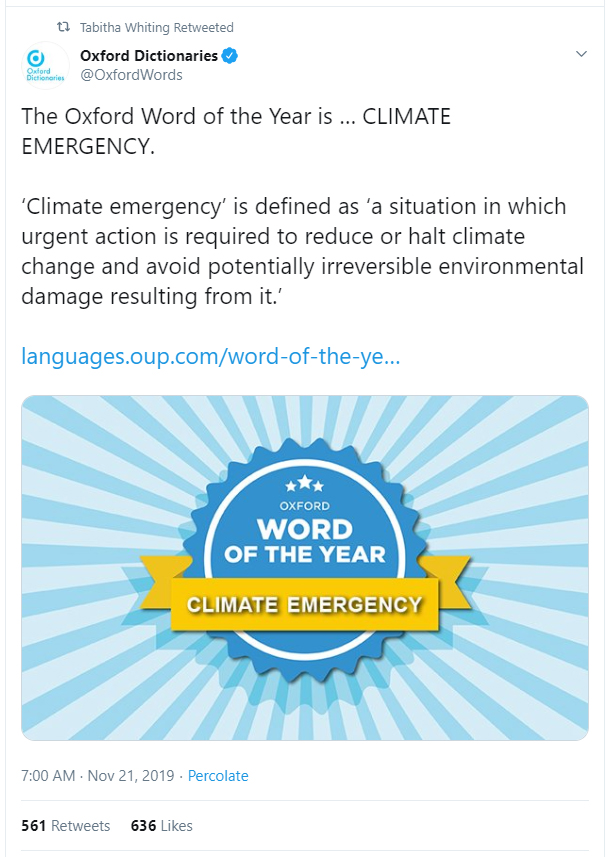 Oxford said the words soared from “relative obscurity” to “one of the most prominent – and prominently debated – terms of 2019. In fact, the usage of “climate emergency” soared 10,796 per cent during 2019, according to data collected in the Oxford Corpus, a database containing hundreds of millions of words of written English. It was the most common compound involving “emergency,” occurring three times as often as the next most-common, “health emergency.”

This reflects a deliberate decision by some news organisations, including the British newspaper The Guardian, to use “climate emergency” or “climate crisis” instead of “climate change,” to better convey the urgency of the situation, explained Katherine Connor Martin, an editor at Oxford Dictionaries. She said the unusual decision to focus on climate-related terms reflected a “demonstrable escalation” in the language around climate.

Oxford Dictionaries defined climate emergency as “a situation in which urgent action is required to reduce or halt climate change and avoid potentially irreversible environmental damage resulting from it”.

Usage of the phrase CLIMATE EMERGENCY increased steeply over the course of 2019, and by September it was more than 100 times as common as it had been the previous year. pic.twitter.com/w40CIcNMgy

→ The Guardian – 21 November 2019:
Oxford Dictionaries declares ‘climate emergency’ the word of 2019
“Usage of the term increased 100-fold in the space of 12 months, dictionary says.”

→ New York Times – 20 November 2019:
Oxford Names ‘Climate Emergency’ Its 2019 Word of the Year
“In a break from precedent, the dictionary company released an all-environmental shortlist including “climate action,” “climate denial” and “eco-anxiety.” ”

The history of the expression ‘climate emergency’ is described by author David Spratt here:

Urgency of the climate emergency reflected in Words of the Year

→ Mashable.com – 4 December 2019:
Dictionary.com’s Word of the Year for 2019 is ‘existential’, and same
“The website has chosen the word “existential”, as in “existential crisis” or “existential dread” — two things the vast majority of us are likely intimately familiar with regardless of whether we’ve ever used either phrase before.”

This speaks to the impact of the global youth climate movement. https://t.co/Nf2Luj6MXJ

In the year when Greta Thunberg called for young people to skip school to fight political inaction, ‘climate strike’ was named Collins Dictionary’s 2019 word of the year.

→ CollinsDictionary.com – 7 November 2019:
The Collins Word of the Year is… Climate Strike

→ CNN – 7 November 2019:
‘Climate strike’ named Collins’ word of the year for 2019
“Greta Thunberg, Extinction Rebellion and a growing sense of alarm over global heating have made 2019 a watershed moment in terms of climate change action. Now the Collins Dictionary has named “climate strike” as its word of the year, defining it as “a form of protest in which people absent themselves from education or work in order to join demonstrations demanding action to counter climate change”.”