Over 500 regional councils around the world have declared climate emergency.
As well as 2 nations.
Who’s next? #ClimateBreakdown #EcologicalBreakdown https://t.co/bGZbLejZ2Z 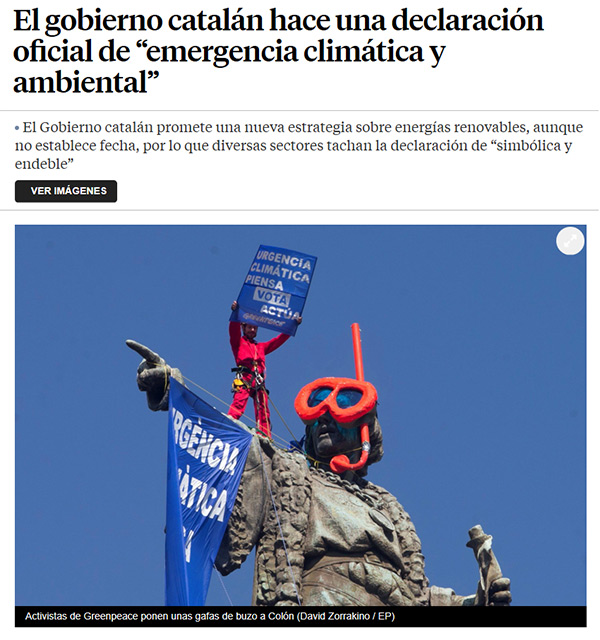 Today the NDP put forward motion to declare a climate emergency in Ontario. @fordnation voted it down.

Five-minute video recording of an impassioned speech by Ontario environment critic Ian Arthur in a Climate Emergency debate. Ian Arthur and the New Democratic Party (NDP) had put forward a motion to declare a climate emergency in Ontario. Premier Doug Ford and the Ontario PC Party voted it down. “The motion did not pass, but the echo of these speeches will not fade anytime soon,” tweeted an Extinction Rebellion group.

→ DW – 29 April 2019:
Climate emergency trend gains traction in German-speaking countries
“Dozens of cities across the world have declared a climate emergency. Now, students behind the school climate strikes are bringing the movement to Switzerland and Germany. But what does that mean exactly?”

→ The Guardian – 30 April 2019:
Two-thirds of Britons agree planet is in a climate emergency
“Greenpeace poll findings released alongside group’s ‘manifesto’ to slash emissions.”


We need a #GreenIndustrialRevolution to tackle climate change and transform towns across the UK that have been held back for decades.

But that won't happen by itself.

It'll take all of us, working together. So get involved with @UKLabour and let's take our future back. pic.twitter.com/OQhd9LyvRW

“The declaration ultimately represents a change in the “story” of the climate crisis, forging a newfound sense of urgency, according to Aidt: “If we don’t have a good story that gets everyone to come together around a common purpose and goal, we will fail to deal with the enormous challenge of transforming our societies to zero emissions and begin the task of carbon drawdown.” ”
~ Leah Dunlevy in Pacific Standard on 8 May 2019

Australians overwhelmingly agree the #ClimateEmergency is the… https://t.co/svdA6u85Ag

The federal Greens will push for Australia to declare a national “climate emergency”, following in the footsteps of the UK. With Britain’s parliament becoming the first in the world to make such a declaration, federal Greens leader Richard Di Natale says it’s time to do the same at home.

“We’ve put forward proposals to the parliament already. We’ll be doing that again when we return to the parliament,” he told AAP on 4 May 2019. “We’re calling on both the Liberal and the Labor party to support what the conservative party in the UK have now adopted.”

Senator Di Natale says the push isn’t a lost cause in Australia’s political environment because “the pressure (to act) is building and it’s building very fast. The major parties ignore the community at their own peril.” 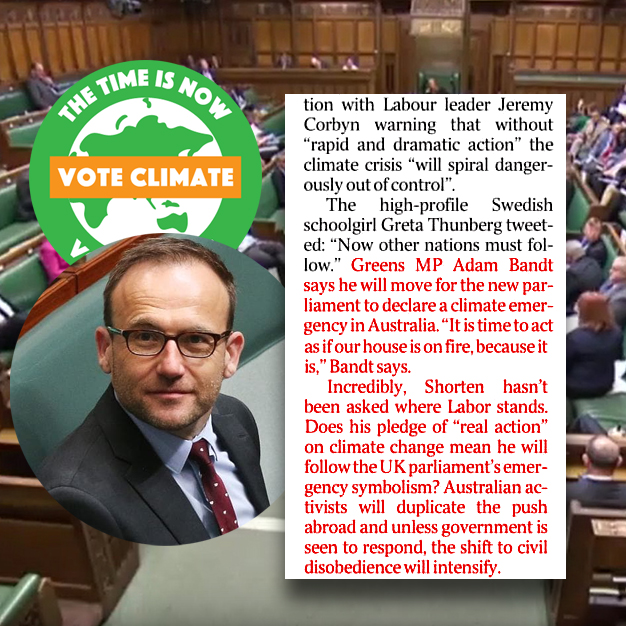 If re-elected, Adam Bandt from the Greens promises to move the declaration of a climate emergency in the Australian parliament. The clip is from the conservative national newspaper The Australian. Excerpts:

• Greens MP Adam Bandt says he will move for the new parliament to declare a climate emergency in Australia. “It is time to act as if our house is on fire, because it is,” Bandt says.
• The progressive tide for global action is leaving Shorten far behind, let alone Morrison.
• Any Labor victory in the May 18 election (that) rejects the debate about modelling, costs and economic downsides in favour of the principle of urgent action to fight global warming… would crush the conservative side of the Coalition, with its ideology of climate change caution.

→ The Australian – 4 May 2019:
Shorten reinvents climate politics
By Paul Kelly

Abigail Boyd: “My first notice of motion in parliament acknowledges the climate emergency and calls on the government to stop approving new thermal coal, oil and gas extraction. Let’s embrace our renewable energy future and create thousands of sustainable jobs in NSW.”

Abigail Boyd is the Greens MP in NSW Parliament. Before her election she was a corporate lawyer specialising in global banking regulation

Former minister calls for Labor to declare a climate emergency

“If we fail to act on climate chaos at this point in our history then Australians will be hostage to external and increasingly unpredictable events of an order of magnitude and seriousness of threat most reasonably compared to war.

I’m not comfortable with the military analogy but it is applicable for the simple fact that it is the closest example we have for an incoming government to reference. Climate chaos washes across borders, it is on a world scale. Our national interest is at stake, as is our relations with other nation states.”
~ Peter Garrett, former Australian environment minister, singer of Midnight Oil

“The former environment minister Peter Garrett has urged an incoming Labor government to convene a climate emergency summit to plot a transition to zero carbon, and create a super department aligned to Treasury, like the Department of Post War Reconstruction after the second world war, to implement the transition.”
~ Katharine Murphy, political editor, The Guardian Australia

— Doctors for the Environment Australia (@DocsEnvAus) May 3, 2019

It’s 2019. Can we all now please stop saying “climate change” and instead call it what it is: climate breakdown, climate crisis, climate emergency, ecological breakdown, ecological crisis and ecological emergency?#ClimateBreakdown #EcologicalBreakdown