What have we learnt so far from the Climate Emergency Declaration and Mobilisation campaign in Australia and what is needed to achieve our goal? 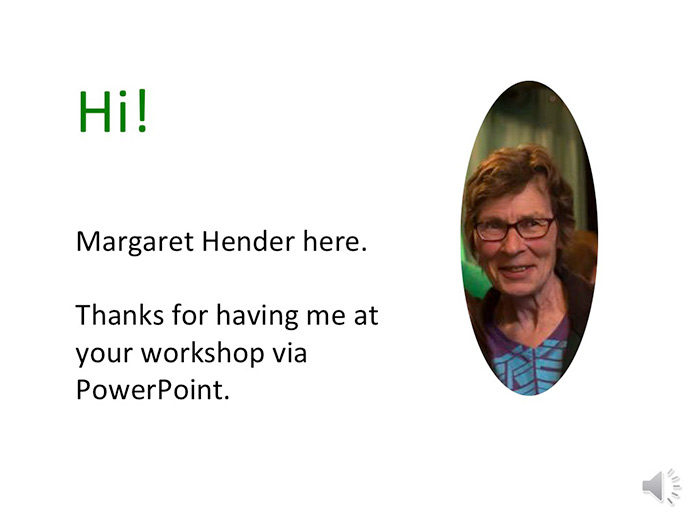 A number of people in this room, and others, have been involved in climate emergency campaigning for years now, and especially since the book ‘Climate Code Red’ appeared in 2008, so we’re not doing something totally new. The thing that is new is to specifically campaign for government to declare a climate emergency right now and mobilise resources at wartime scale and speed to fix it.

Nobody has campaigned specifically for a climate emergency declaration and mobilisation before, so really, we’ve just been making it up as we go along, and hopefully are getting at least some of it right. 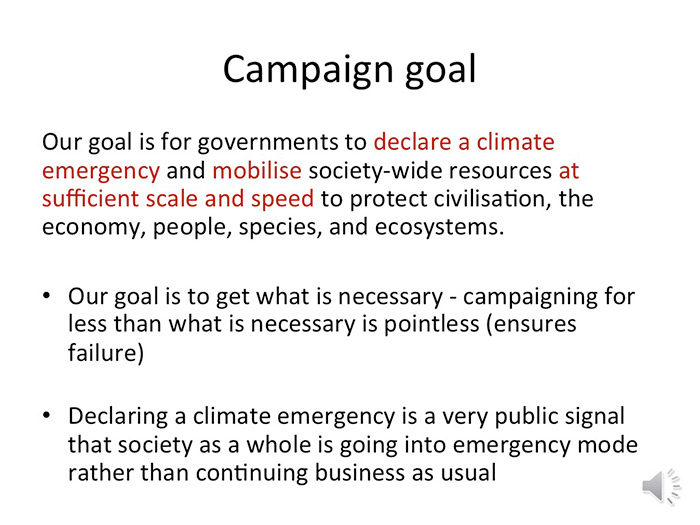 The key words of the campaign goal are in shown in red in the text above. They are the essential elements. Different people might prefer different words, but that is just messaging. The important thing is that the people working on this campaign share the same vision.

The above are just some of the climate emergency quotes we’ve received from people endorsing the climate emergency declaration petitions. People we have asked to sign the petitions have been expressing relief, even excitement, that this campaign is telling it how it is, and that we are finally demanding a climate response that they can imagine being effective.

The first requirement – recognition that we are in a climate emergency. The February spike in global average temperatures at well over 1.5°C above pre-industrial temperatures was sufficiently alarming for climate emergency articles to appear in main stream media. It was such a startling aberration – not just getting higher at the rate we’ve been seeing for years, but an enormous jump in the rate of change.

It seemed the ideal opportunity to say, “We are now in an emergency!” and launch the climate emergency declaration campaign. Instead of saying ‘we need x% renewable electricity by 2030’, or saying ‘Stop Adani to save the reef’, we should be saying loudly and clearly that we are in an emergency – that climate impacts are already killing people and destroying eco-systems, and each day we continue to burn fossil fuels – today, tomorrow, and next week – will kill even more people.

I’ve been surprised how my own perspective has changed since working on this campaign. Now that I’ve started saying ‘We are in an emergency’, and imagining that it is possible to get a rapid turn-around and effective emergency speed climate action, ‘clean energy’ and ‘dirty fossil fuels’ seem wildly inadequate terms. Burning fossil fuels is far worse than implied by ‘dirty’ or ‘polluting’. The other day someone suggested, instead of referring to ‘polluting fossil fuels’, we should be saying ‘death-dealing fossil fuels’.

This one is relatively easy. These publications by David Spratt and Philip Sutton pretty much cover the questions of what needs to be achieved, and how quickly.

The practical means of achieving a lot of what needs to be done are also already known. There is the suite of blueprints published by BZE for starters, and plenty of other similar studies. The public might need a bit more educating, but the major problem has always been achieving the political will and the public will to implement what we already know.

The climate emergency declaration and mobilisation campaign has basically ‘invented’ a new pathway for achieving climate goals, but the credit really lies with the book ‘Climate Code Red’. The message I picked up from that book was this: when faced with an existential threat, like during World War II, governments can restructure the economy amazingly quickly, and society can act for the common good in ways they normally wouldn’t.

So, the key stepping off point for this campaign, in response to the alarming February spike in global average temperatures, was to say, let’s start demanding exactly what is necessary, and what we know is possible based on World War II mobilisation history, rather than settling for what most people might think is possible.

The Australian parliament could declare a climate emergency tomorrow, and they could restructure the economy and throw everything we’ve got at solving the climate emergency, so why on earth aren’t we demanding that?

So, instead of asking for what we think is politically possible, or what the public might support, the Climate Emergency Declaration and Mobilisation campaign is asking for what is necessary, on the grounds that anything less will not be effective.

Once we started imagining what a climate mobilisation might look like, we realised that, if we could manage the undeniably difficult task of getting a climate emergency declaration and mobilisation, this would almost automatically achieve many of the piecemeal campaigns that thousands of activists all over the country are currently pouring their energy into.

Victoria has just banned on-shore unconventional gas projects. This is a wonderful win, but you know what? Within days of that announcement the Premier of South Australia invited the affected fossil fuel companies to apply to drill in South Australia instead! So the battle starts all over again. A Climate Emergency Declaration and Mobilisation campaign win for Australia would stop all new fossil fuel projects once and for all.

At this point very few people are aware that this campaign exists. The public can’t begin to imagine this possible future, or decide if they want it, until this campaign ask becomes a familiar ask.

At one time I imagine almost nobody thought slavery could be abolished, or even should be abolished. Once everyone became familiar with that ask, it became a ‘legitimate’ thing people could demand. I imagine even people who had never questioned slavery started joining in the call to abolish slavery once the abolition campaign prompted them to think that such a future was possible.

Our campaign ask needs to become just as familiar before it will occur to the public to imagine and demand a climate emergency mobilisation – and why wouldn’t they demand that if they know their survival is at stake?

Unless people are well-versed in World War II history, or unless they have read ‘Climate Code Red’, they will have no idea how quickly and thoroughly an economy can be transformed during an emergency. Personally I think we should avoid the war rhetoric that the US Climate Mobilization is favouring, but we do need to pass on enough information about World War II mobilisation so that people can imagine a similar scale and speed of climate emergency action.

There’s not enough time to go into all the reasons why I think it is vital to give everyone something to do. Instead I’ll finish with a quick story. Last week I was reading a climate science article predicting we are headed for the sixth mass extinction unless we take climate action extremely quickly to avoid it. He then mentioned we are also at three minutes to midnight in terms of the threat of nuclear warfare, and wondered if that might annihilate us before climate change does.

My thought process was a classic example of how people tend to respond to climate change. My instant response re the nuclear warfare threat was, I don’t want to believe that. What are this guy’s credentials for saying that? I cannot possibly influence that outcome, so I’m not going to even think about whether there is a real nuclear warfare threat or not. In contrast, I was taking the climate related content seriously simply because I do feel there is something I and people like me can do, and are doing, to make a difference. We do need to give everyone a pathway – something they themselves can do – not just because we need all hands on deck, but also because the public won’t engage with the problem unless they think they can do something about it.

» Margaret Hender:
Metamorphosis from wild idea into a no-brainer 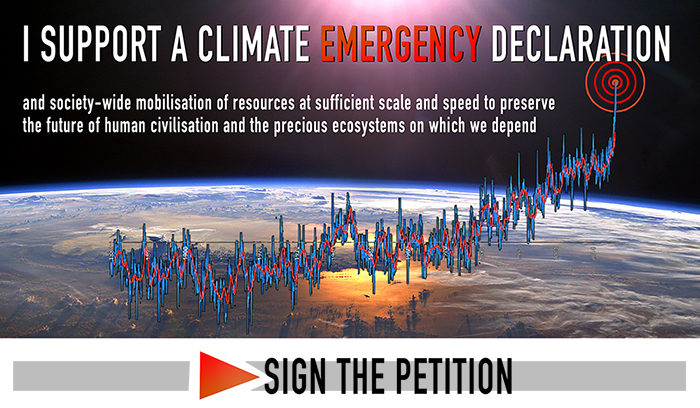